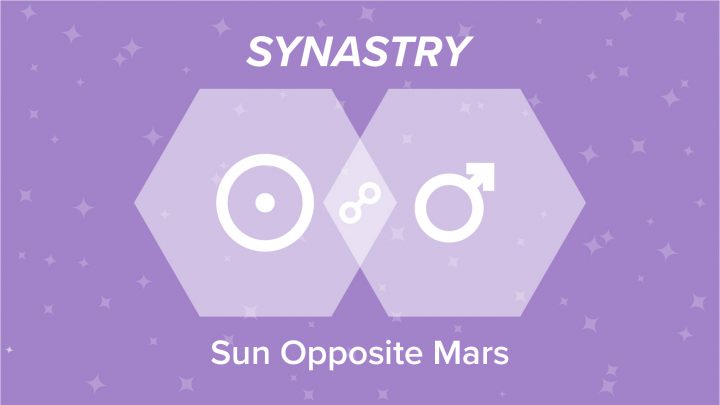 The Sun opposite Mars is a difficult aspect in synastry. It can be a big source of conflict and contention between two people.

The Sun represents our identity and our ego. It is who we see ourselves to be, and it is the place in us that wants to shine and make our mark upon the world.

The function of Mars is to allow us to exert our will upon the outside world. It gives us energy to work, but it also pushes us to fight for what we want and need.

An opposition in synastry is an aspect that puts us in direct conflict with another person. If managed correctly, however, it can also be a source of balance.

Sun Opposite Mars in Synastry

In many ways, an opposition in synastry is almost self-explanatory. It represents an area in which two people are diametrically opposed to each other.

In the case of the Sun opposite Mars, one person’s ego is opposed to another person’s most volatile planet. There cannot help but be conflicts between the two people who are involved.

This conflict may or may not be fatal to the relationship. A lot will depend on the other aspects that the two have between them. A lot will also depend on their humility and willingness to work on their stuff.

Regardless of whether the relationship survives, this aspect will require both people to take a good hard look at themselves. This can create an opportunity for tremendous growth if they take advantage of it.

There are a few sign combinations that will alter the reading of this aspect.

Both the Sun and Mars are strong in Aries and are debilitated in Libra. This means that one person will have a healthy sense of self-confidence and pride and the other will struggle with these traits.

This combination can also lead to a one-sided attraction.

The person with either the Sun or Mars in Aries will find it easy to be assertive; they will tend to find the other person intriguing.

The person with either the Sun or Mars in Libra will have a very difficult time going directly after what they want, and they will often try to rebuff the other. These efforts may not be respected or even noticed, though, which can create a very uncomfortable situation.

In the case of the Sun in Cancer and Mars in Capricorn, however, this aspect is even more difficult than usual.

The person whose Sun is in Cancer will often feel hurt by what they see as the insensitivity of the other.

House Positions of the Sun and Mars

In any synastry reading, it is important to consider the houses involved. This is particularly true with difficult oppositions, such as the one between the Sun and Mars.

Just like opposite signs, opposite houses represent polarities. The houses in which this aspect occurs will show the primary area of conflict between these two people.

The Sun opposite Mars can have the effect of preventing a relationship from forming, but in a romantic relationship, there is a complication. This complication is that any Mars aspect in synastry can generate sexual attraction, even difficult ones.

This can create a situation in which two people have great sex but cannot stand each other outside of the bedroom.

When it is a man’s Sun opposite a woman’s Mars, the problems between them can seem like a typical “battle of the sexes.” His ego will tend to be threatened by her strength, and there will be a strong sense of competition between them.

For such a relationship to succeed, both of them will need to develop self-awareness and be willing to give in and compromise.

In advising such a couple, it will be important to look to see if there are other more harmonious aspects that they can draw upon.

This relationship can be just as difficult and volatile as when the genders are reversed. The problems may be a little more subtle and harder to see to the outside observer.

There will be a sense of competition between them, and he will tend to threaten her ego. She may keep her feelings inside, however.

Aggressive, Martial behavior is still seen as more “normal” in men than it is in women. This could make it harder for her to admit to what is going on inside.

If this happens, her anger and frustration may smolder for some time before it reaches its breaking point.

Just as in the case above, it will be important to look for other, more pleasant aspects between them.

Sun Opposite Mars in Friendship

Friendships are relationships of choice. This makes it far less likely that two people who have this aspect between them will form a friendship.

Without family ties or sexual attraction, in most cases, this aspect will prevent two people from becoming close in the first place.

If they do form a friendship, it will be because of other, nicer aspects that are between them.

This aspect between friends could indicate that they have a rivalry of some sort. It could be in a sport or other recreational activity. If that does not apply, the rivalry can be anything.

How to Tell if the Sun is Opposite Mars in Synastry

Below is a graphic showing the signs in opposite pairs:

If a person’s Sun is in a sign that is the opposite of the sign of the other person’s Mars, their relationship will show some traits of this aspect.

The closer the planets are to a perfect opposition by degree, the stronger this aspect will be. The orb, or allowable margin of error, for aspects between the Sun and Mars is twelve degrees.

These planets may be within twelve degrees of a perfect opposition from the wrong signs. Technically, this would be a much weaker version of the Sun opposite Mars.

On a practical level, however, the negative qualities of this aspect will be much worse. This is because these planets will be in signs that have nothing in common with each other, but are still close enough to rub each other the wrong way.

In synastry, the Sun opposite Mars is one of the aspects that indicate conflict and incompatibility between two people. It indicates a clash between one person’s ego and the aggressive nature of the other.

Any possibility for a healthy relationship will have to come from other aspects between them that indicate harmony and compatibility. 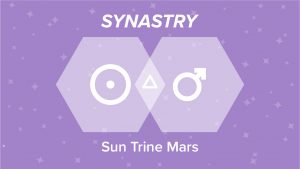 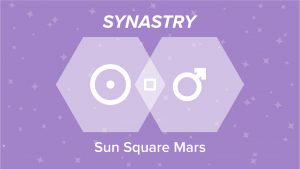 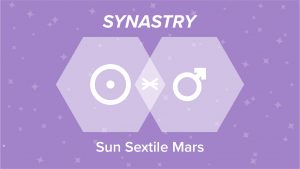 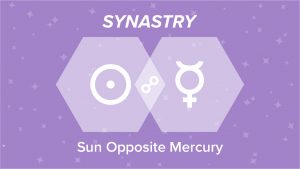 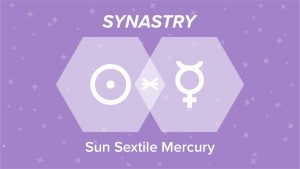