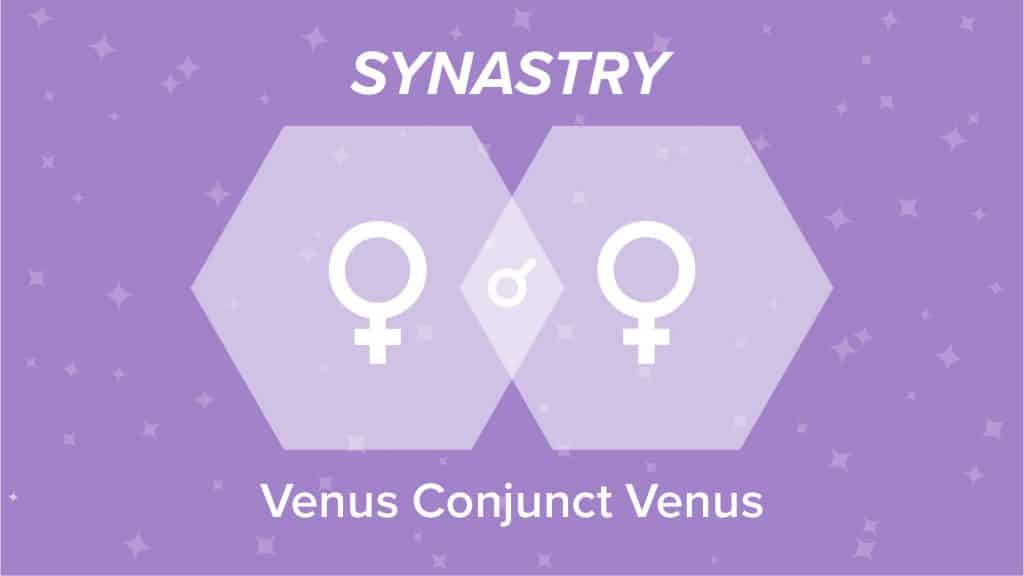 Venus is the Planet of Love and is the primary planet that governs relationships. Because of this, Venus conjunct Venus is a positive and powerful aspect in synastry.

The conjunction is when two planets are in the same place in the zodiac. The keyword for this aspect is "combination."

Like all Venus-Venus combos in synastry, Venus conjunct Venus will generate attraction between two people.

When two people have Venus in the same sign in their chart, they like the same things and feel the same way about love.

This creates a warm feeling between two people. It is easy for them to feel a strong connection with each other.

This aspect is the most positive if it occurs in the signs that this planet rules, Taurus and Libra, or in Pisces, where it is exalted.

In Taurus, this aspect brings a strong mutual sensuality.

In Libra, it brings a love of beauty and romance.

When this conjunction occurs in signs where Venus is challenged, namely Aries, Scorpio, and Virgo, it will soften any potential relationship difficulties that would otherwise be present.

Both people can understand the problems the other faces in being able to express love and affection.

The House that this aspect falls in will also have a strong impact on how it will manifest in any particular relationship.

When a man and a woman have Venus conjunct, it is easy for them to fall in love. They enjoy each other's company and have a lot in common.

Unless there are other aspects that contradict this, there will not be any hint of anything that remotely resembles a "battle of the sexes."

They will understand each other in a way that most opposite-sex couples cannot.

Indeed, they may understand each other too well. There is a danger that this relationship will be so amiable that it lacks sexual tension and chemistry.

This couple could become more like best friends than lovers.

This is a particular challenge if the conjunction occurs in one of the Air Signs, Gemini, Libra, or Aquarius.

In these signs, there will be an intellectual comradery that could become more important than physical attraction.

If the conjunction occurs in one of the Fire Signs, Aries, Leo, or Sagittarius, the element of Fire will provide passion and chemistry, so this becomes less of a concern.

In any sign, this pair will instinctively understand how to please each other. It will be easy for them to forgive each other when and if they fight.

Overall, this is a lovely aspect to have in a romantic relationship.

While a Venus/Venus Conjunction is wonderful to have in a romantic relationship, it is actually even more of a common aspect to find in the charts of close friends.

In friendship synastry, Venus conjunct Venus means that two people have a great deal in common.

They have the same taste in clothing and enjoy doing the same things. They will probably even like the same music, television shows, movies, and books.

This will be a friendship with a powerful bond. In many ways, they will be closer than most romantic relationships.

They could easily fall in love with the same person.

Another danger is that one or both of them may think that they have a "crush" on the other, regardless of their gender or sexual orientation.

This is because the connection is so strong that the line between friendship and love can become blurred.

Lastly, if one of them gets into a romantic relationship and the other is still single, it is very likely that there will be problems with jealousy.

The single friend may compete with the romantic partner for their friend's attention and affection.

Even with these dangers, a Venus-Venus conjunction will go a long way in helping these friends to work out their problems and difficulties.

They will not be able to stay angry at each other for long.

How to Tell if Venus is Conjunct Venus in Synastry

Any time that Venus is in the same sign in the chart of two people, there will a hint of a Venus/Venus conjunction.

For a more exact determination, look to the degree of Venus in both charts.

There is an orb (allowable error) of 7 degrees for a Venus/Venus conjunction. This means that if Venus is within 7 degrees in the natal chart of both people, this aspect is definitely present.

The closer Venus is in the two charts, the stronger the conjunction will be.

If two people have Venus in adjacent signs but still within orb, there is still a conjunction, but it is considerably weaker and fainter than it would be in the same sign.

Venus conjunct Venus is a wonderful aspect to have in any relationship. In a love relationship, it brings two people together and helps them to stay together. It gives friends many things in common.

Overall, this is one of the most positive aspects that two people can have between their charts. 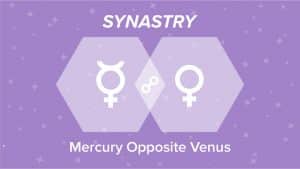 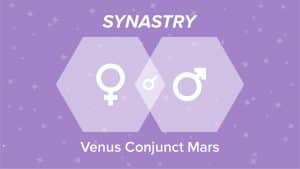 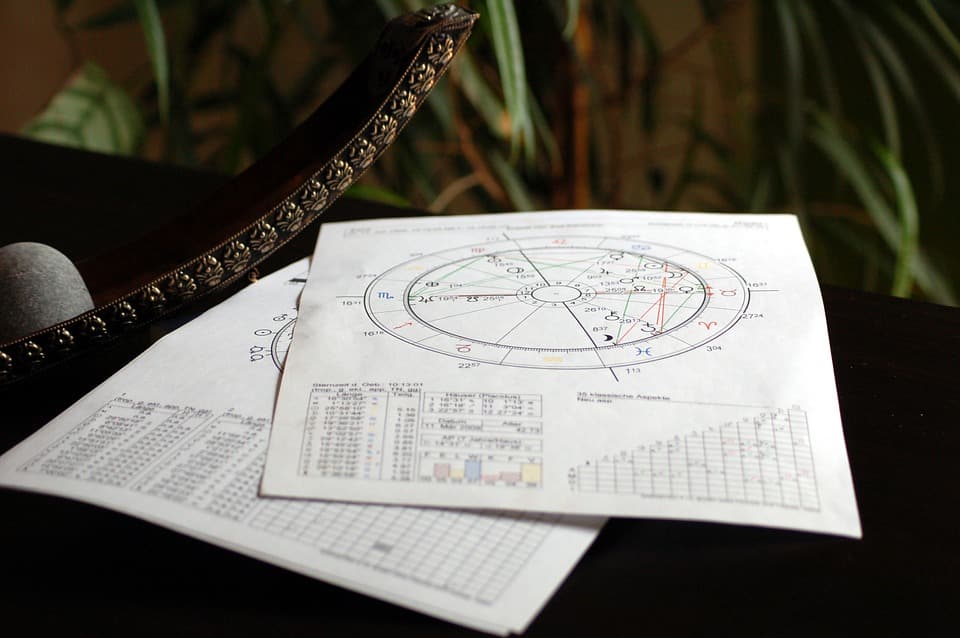 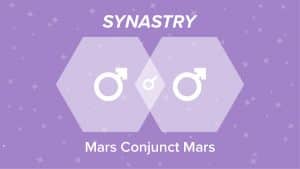 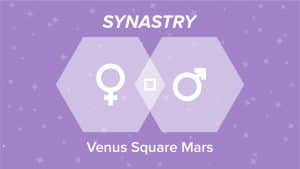