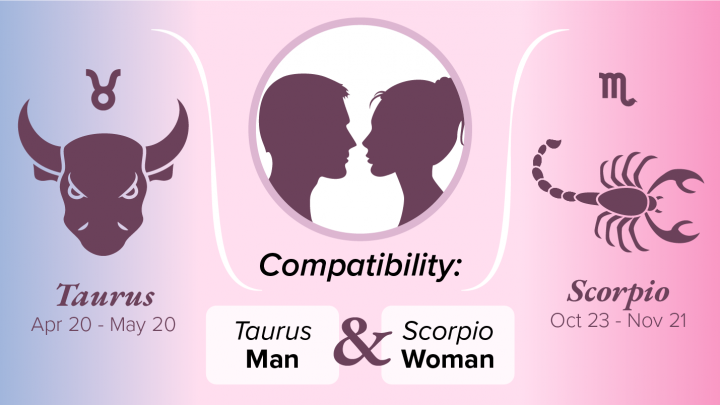 A Taurus man and Scorpio woman are very different people. They are the exact opposite of each other, in fact.

With respect to zodiac compatibility, however, signs that are opposite are the natural partners for each other. The reason for this is that they provide balance.

On the other hand, an opposition is a difficult aspect between signs, and there is always the potential for conflict with such pairs.

The amount of conflict opposite pairs will have depends on the signs involved.

In the case of a Taurus man and Scorpio woman, the potential for conflict is relatively low in comparison to other opposite sign pairs.

They share a need for security and stability, and they do a very good job of balancing each other without the need to argue or judge each other for their differences.

Overall, this is a very good match.

A Taurus man is steady and reliable. He can be counted on to be around through thick and thin.

Consistent in his habits, you always know where a Taurus man will be and what he will be doing at any moment in time.

He is also very calm. It takes a lot to rile or unnerve a Taurus man.

When it comes to a partner a Taurus man needs someone who is as steady as he is, but who also can give him energy when he slips into laziness.

He is very happy when he has a family to provide for, and he is completely devoted to his partner.

A Scorpio woman is powerful and determined. She knows what she wants and she goes after it.

Anything that she does she does fully and completely. If she has a goal in mind, there is nothing that will deter her from her path.

In her personal life, a Scorpio woman has stormy and powerful emotions.

She is almost always at least a little empathic, so she tends to pick up on the feelings of her partner.

A Scorpio woman forms very deep bonds, and because of this, she is very selective of her friends and even more selective with respect to who she will date.

She needs someone who is calm and who she can count on to always be there.

Dating a Scorpio woman can be an adventure. She does not trust easily and can go out of her way to make it hard for a man to date her.

A Taurus man will probably find her attractive, but he might be too intimidated to make the first move.

On the other hand, a Scorpio woman is as likely to follow a routine as a Taurus man, so they will probably keep running into each other over and over again.

Eventually, they may start to get closer.

A Scorpio woman will find a Taurus man restful. Because of his natural calm, he does not exude much in the way of nervous energy or deep emotions.

For this reason, she will not feel the need to shield herself psychically from him the way she must with most people.

This will make it easier for her to let down her guard with him.

Scorpio has the reputation for being a “sexy” sign, and that reputation is not entirely undeserved.

A Scorpio woman has the ability to receive a man completely and fully, on a psychic as well as a physical level.

That being said, Taurus may deserve the reputation of being the “sexy” sign more than Scorpio does.

A Taurus man is tender and sensual. He knows how to please a woman, and he greatly enjoys sex.

A Taurus man and Scorpio woman will have a great sex life together.

A Taurus man and Scorpio woman will do well together as husband and wife, and a marriage between them will almost certainly last a lifetime.

To begin with, neither of them will make a commitment to each other lightly, and they will stick by their wedding vows no matter how difficult it gets.

For this reason, even if the marriage turned out to be rocky, neither of them would give up on it.

Luckily, though, it is quite likely that their marriage will be a very good one. A Taurus man is a wonderful husband for a Scorpio woman.

His steadiness will provide an anchor for her, and she will be able to trust him completely. She will feel safe and secure that he will never leave her or betray her.

He is also one of the few men who will be able to weather her emotional storms.

Likewise, a Scorpio woman is a wonderful wife for a Taurus man. She is steady and faithful, but she is also able to provide enough spice to their marriage to keep him from getting too complacent.

Her empathy will also be a boon to the marriage, because a Taurus man is not always able to express himself when there is a problem.

A Scorpio woman will be able to sense any difficulty and will insist that they talk about it.

A Taurus man and Scorpio woman as parents

As parents, a Taurus man and Scorpio woman are a perfect match. He will be gentle, tender and playful, while she will provide discipline.

A Scorpio woman is highly perceptive, and their adolescents will not be able to get anything past her.

She will also understand the wild emotions that teenagers sometimes have, and she will be able to help them through these feelings.

While a Taurus man and Scorpio woman are a very good couple, working together may present a challenge.

They are both extremely stubborn and may find it hard to adjust to the working style of the other.

A Taurus man is slow and steady when he works. He performs tasks in the way he has always done them, and for him, no other way exists.

A Scorpio woman is also steady in her work, but for her, it is the goal that matters, not the means she uses to get there.

She will not vary on the ultimate objective, but she can and will adapt her methods.

She will find it frustrating if the methods the Taurus man uses are inefficient and if he refuses to change them.

That problem aside, when these two set out to accomplish something, there is nothing that will stand in their way.

They both have the staying power to complete anything that they begin.

A Taurus man and Scorpio woman will not fight often, but when they do fight, it will be quite a showdown.

The temper of a Scorpio woman is legendary, and while a Taurus man does not get mad often, when he does it is almost frightening.

There are two potential problem areas for a Taurus man, Scorpio woman couple.

They both dig in their heels about something

Taurus and Scorpio are both Fixed signs. Fixed signs are usually quite stubborn, and it is very hard to change their mind once it is made up.

If a Taurus man and Scorpio woman decide to oppose each other, they will be at loggerheads for a very long time.

Taurus is Fixed Earth and Scorpio is Fixed Water.

It may seem like Earth would prevail against Water, a river is bound by earthen banks after all. Water has the power of erosion, however. In time, she will eventually wear him down.

The good news is that it is unlikely that a fight, no matter how bad, will cause them to break any commitments that they have with each other.

This is the positive side of their Fixed natures.

A Scorpio woman is subject to powerful emotions. A Taurus man will calm and steady her, so she will have fewer storms than she would with another more volatile man.

Still, this may put a strain on their relationship, as a Taurus man really does not like conflict or unpleasantness.

This will be more of a problem when they are younger. As Scorpio women mature, they tend to learn how to manage their deep and intense emotions in ways that do not damage their relationships.

A Taurus man and Scorpio woman are a really good pairing.

They are very different from each other, but these differences tend to complement each other.

Both of them take their commitments very seriously, and neither of them will break any vows or promises that they make to each other.

They have the ability to have a long-lasting and very stable relationship that lasts a lifetime.

Susan, it sounds as if u are dating a Narcissist, maybe even a covert narcissist. I married that. They will never support u. That transcends horoscope signs. Get out as fast as u can and know that they will never forgive you for leaving. They want to discard you. Mine took a whole year to spread lies about me , little ones, to mutual friends so they shunned me and I had no idea why. As he was abusive! It was all planned. But I lett day him and he went after my kids. So don’t have kids with this man. and if you do.... move to another city before the divorce papers, as that’s the only time you can get away with that! or he will hurt the kids emotionally or physically to get back at you.

As 4 me am lost, am a scorpio lady dating a Taurus man who is a control freak, how can a leader take instructions 4frm a control freak who doesn't support her in anything, he only wants me 2 do according 2 his command but doesn't give ears 2 anything I say, we just break up last week. I just don't get it, everything abt our triat is true but de only thing I lack is dat he doesn't support me with my needs at all, I do everything 4 myself. Why so?

That’s how it goes in my relationship but she’s a Scorpio, idk you’re situation but really listen next time to what he says maybe you’re taking it the wrong way or maybe you possibly did something in the past that converted his trust, listening and love for you turn into nonsense and stress . A Taurus man May not leave when he’s truly in love no matter the cause especially with the one he loves the most and if your a good match 9/10 that’ll be the case. He’ll stress more stuff over time and it might come off aggressively. But catering to your situation if he’s just acting like tht because that’s how HE is y’all would need to sit down and try find a center, find a place you BOTH can see eye to eye this is usuals a method to use with any problem between the two. Taurus men are listening the type now this isn’t just directed towards you but any zodiac sign that loses there traits over time in a relationship is because of some kinda of traumatic experience that could be cheating, saying a certain thing. angering a Taurus even more during arguments will get you know where it will strip them of the loving characteristics that they do have over time it can seem like dictatorship over your relationship

It’s crazy how real this article is about my relationship... I do agree with just about everything i read.