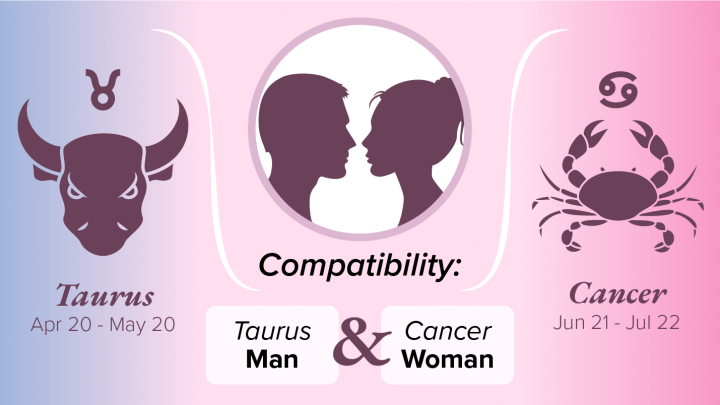 A Taurus man and Cancer woman have very high compatibility and form one of the best matches in the zodiac.

In many ways, this couple is the best of both worlds. They understand each other very well, and they have similar needs in a relationship.

On the other hand, this combination are different enough that they complement each other and are able to balance each other’s more difficult traits.

On top of that, Taurus and Cancer are the two most domestic signs of the zodiac, so they will be well-suited to a happy and long-lasting marriage.

A Taurus man is happiest when he is at home, preferably a home that is pleasant and beautiful. He is solid and dependable.

Tending to follow the same routine each and every day, one can usually set your watch to the comings and goings of a Taurus man.

Gentle and often a little shy, he has a hard time taking the initiative when it comes to meeting women, but once he has found someone, he will stay with her for life.

A Taurus man is usually quite conservative when it comes to marriage and family life.

He would prefer to be the breadwinner and to have a wife who is happy taking care of the home.

If at all possible, he will have a well-paying position that he can work at until he retires.

In the present day and age, these type of jobs are harder to come by, but if anyone can find such work, it will be a Taurus man.

A Cancer woman wants nothing more than to have someone to care for.

The archetype for this sign is the mother, and a Cancer woman has a natural gift for nurturing others.

This sign is known for being a constant worrier, and she will constantly be thinking about the safety and security of those she cares about.

It is easy to underestimate a Cancer woman because she can come across as shy and timid, particularly to those she does not know.

Cancer is one of the Cardinal signs, though, along with Aries, Libra, and Capricorn. She is just as tough and just as powerful as any of those signs.

Even though she is domestic, she is constantly busy working to make her home a safe and pleasant place.

There is nothing as fierce as a mother protecting her young, and a Cancer woman can be quite formidable.

A Taurus man and Cancer woman will have an instant attraction to each other, but it may be hard for them to find the courage to talk to each other at first.

A Taurus man has a lot of difficulty taking the initiative, and a Cancer woman is often very shy in public.

Once one of them breaks the ice, however, they will warm to each other immediately.

Both of them will feel like they belong to an era long past, and they will find each other’s presence very comforting.

Even though they will have a strong connection, it is likely that they will take their time in moving the relationship along.

Neither one of them will be in a hurry. He is very slow to make changes, and it takes her a long time to open up.

Of the two, she will be the one who will move things along and push them to into making a deeper commitment to each other.

A Taurus man and Cancer woman have perfect compatibility for each other in the bedroom.

He is a gentle, tender, and considerate lover. She is very receptive and intuitive. He will make her feel safe and secure, which will help her be extremely open to him.

While they will enjoy sex for the act itself, if they are married, they both will want children.

For this reason, they will pay close attention to her fertility cycles and will try to maximize the chance that she will get pregnant.

A Taurus man and Cancer woman are an excellent marriage match.

To the extent that is possible, this couple will want a traditional marriage reminiscent of the 1950s.

They both will want a house, children, and perhaps a dog or two.

Life being what it is, they may not be able to have the peaceful, idyllic life that they would both prefer, but this is what they will strive for.

Cancer women are known to be excellent cooks, and many Taurus men are as well, so their family will have no shortage of good food.

If at all possible, they will have a garden, and this may be the best way for the Taurus man to get some exercise.

A Cancer woman has enough initiative and force of will to get a Taurus man off of his chair and away from his television from time to time.

They will be very traditional parents, and they may have trouble if any of their children are unconventional in any way.

The teenage years will be especially difficult for a Cancer woman, who will worry a great deal about their safety and what they may be getting into.

A Taurus man is calm and steady enough to settle a Cancer woman down when she starts to worry about things.

Their children may continue to live with them long after they become adults, as neither of them will be eager to push them into leaving the nest.

A Taurus man and Cancer woman will work very well together.

For starters, a Cancer woman is one of the few signs that can get a Taurus man out of his chair when there is work to be done.

She may seem shy and timid, but a Cancer woman really is a force of nature when she decides that something needs to be done.

The good news is that once a Taurus man gets going, he will continue his task until it is complete. The problem is getting him started.

Although she is just as much of a leader as any other Cardinal sign, she is flexible and pragmatic enough to let him do things his own way so long as he is working.

She will leave him be and find a different task for herself to do.

While this pair may have a rather traditional marriage, she will be in charge of any working relationship or of any project that they do together.

There will not be many serious fights between a Taurus man and a Cancer woman.

They may bicker every so often when she tries to get him moving or when she becomes moody, as Cancer women do from time to time.

There is really only one scenario that can become a major difficulty for this couple.

This difficulty will stem from the strong likelihood that a Taurus man will have a rather sedentary lifestyle. This is part of the nature of this sign.

Such a lifestyle is not necessarily conducive to the avoidance of health difficulties, especially if he eats a lot, which Taurus men are also prone to do.

This will be less of a concern if he has a job which requires a lot of physical activity, but if he does not, he will probably not get enough exercise.

If he develops health problems

If he develops health difficulties, especially those which require a lifestyle change, this could be a source of friction between this couple.

A Cancer woman will worry about him, and out of this worry and concern, she may begin to nag him.

Taurus men do not change easily. Taurus is a Fixed sign and would prefer everything to always stay the same.

He needs to make changes at his own pace a little at a time, and if his health is at risk, she may not have the patience to let him take things at his own speed.

The problem is that pushing a Taurus man will do no good. The more she nags, the more he will resist her.

A Taurus man does not get angry easily, but when he does get mad, his temper can be frightening.

For her part, a Cancer woman is far from defenseless. She can get downright cruel if she is threatened.

The solution to this is twofold. He needs to understand that she is nagging because she loves him and is genuinely worried about his welfare.

Likewise, she needs to be patient and let him decide for himself when and how to make the necessary changes.

It is better for him to change a little at a time than not at all.

Also, it would be a terrible tragedy if her love and care for him put their relationship at risk.

In many ways, a Taurus man and a Cancer woman are a match made in heaven.

They understand each other and can balance each other’s excesses.

They are very likely to have a marriage that will last a lifetime. This is an excellent pairing.