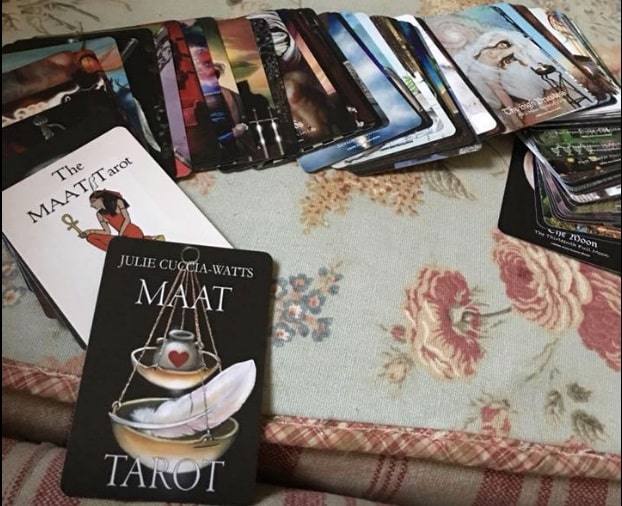 In this Tarot deck review, we find a phenomenal work that takes excellent care of every detail in a clear attempt to reinterpret the Rider-Waite imagery and lay the foundations of a new universe.

With 78 large-size cards, the MAAT Tarot deck will stand out in a spread, not only for the beauty of its images but for the cards size that is approximately 50% larger than the average traditional deck. With the MAAT Tarot, you won’t miss any detail, that’s for sure.

Classical art, original pieces, reinterpretations and fascinating creations are part of this fascinating compendium that combines a vast astrological, archetypical, and artistic knowledge as well as an immense sensibility to achieve a coherent fusion that’s still manageable for the average tarot reader. MAAT Tarot summons the pictorial and symbolic spirit of diverse cultures and historical moments producing a beautiful work that recreates your imagination and intuition.

Julie Cuccia-Watts is a gifted artist dedicated to re-interpreted tarot in the most creative ways. According to Cuccia-Watts “Inspiration can be found in the nebulous, liminal space between sleep and waking.” In this sense, she has developed a line of research aimed at rescuing cultural elements mainly from ancient Egypt. Cuccia’s works like The Journey into Egypt Tarot and The MAAT Tarot deck show a strong influence of this highly significant North African culture.

Dreams, the favorite communication tool of the unconscious, is another excellent source of inspiration for Cuccia-Watts. In her artistic style, we find oneiric images very close not only to what is archetypally expected of a major trump but also to that of which dreams are made off: colorful hopes, intricate messages, and depth.

To write this Tarot Deck Review, we take a tour through Cuccia’s work and bump into Shamanic, Celtic, Nordic and Egyptian influences making this deck a one of a kind piece.

She even challenges the traditional cards and goes further, inviting us to rethink our preconceived ideas and concepts about each major arcana. The Devil card is usually starred by a tenebrous figure with hoof and horns, Cuccia-Watts instead, present us a woman giving birth. What a challenge!

Perhaps Cuccia Watts’s Devil talks about the passionate outburst that led to that conception; maybe it’s about the pain that a woman bears while giving birth or the suppressed desires deep down in her womb that are coming out to light. Could it be related to the Godly biblical condemnation of Eve for her association with the devilish snake: you’ll feel pain during childbirth. Maybe the author is making a statement about the woman’s right to make decisions over her body, or perhaps we’re facing Rosemary’s baby… You know what was said: the devil is in the details. 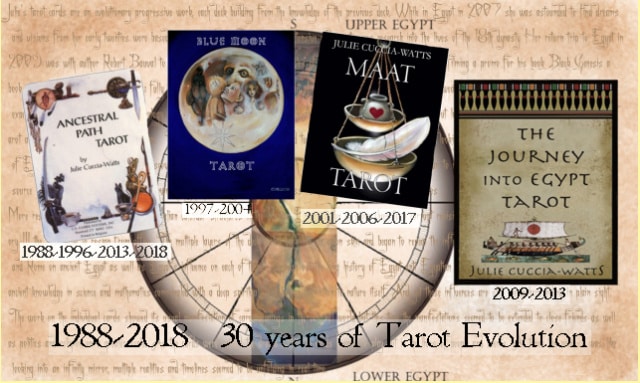 The first question that came to my mind was: is MAAT an abbreviation? Well, not all of us have delved into Egyptian culture in such depth, perhaps Thoth Tarot followers have the answer on the tip of their tongue already… Maat was Thoth’s wife and her name roughly translated to justice or truth. This simple, but powerful detail, tells us all about tarot that will turn its attention to creating a new, more feminine, tarot perspective.

This reinterpretation doesn’t stop at a specific historical scenario, but instead takes elements from various eras, cultures, and traditions, to activate the divinatory power of any reader, regardless of their origin.

In each card, Cuccia-Watts establishes an analogy with a lunar cycle phase according to the astral energy evoked at that moment. We find, for example, that The Chariot Tarot card, the adventurous prince who embarks on a new conquest in a car driven by two sphinxes, has been replaced by an image of the Great Sphinx of Giza in Egypt, guarded by lunar energy in each of its phases, furrowing on a starry night and the Leo constellation.

This deck is undoubtedly a work of impressive depth, a genuine attempt to create something unique that stands by itself. The author not only reinterprets, but creates a friendly system with tarot readers accustomed to traditional schemes, inviting them to rethink specific meanings and concepts.

The female symbolic component, the maternal connection, reproduction, are continuously repeated scenarios that transmit a natural energy, inviting you to reconnect with the goddess without neglecting the active principle, the masculine energy. 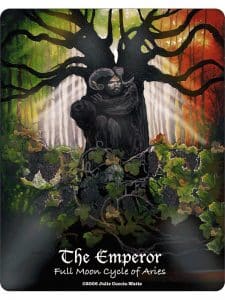 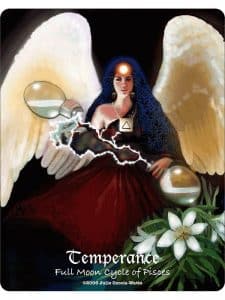 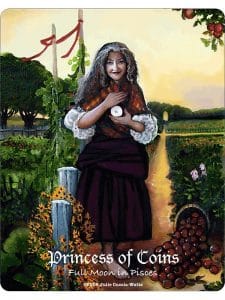 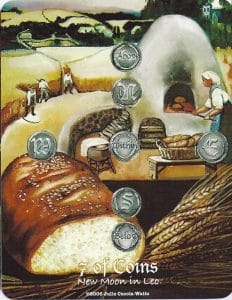 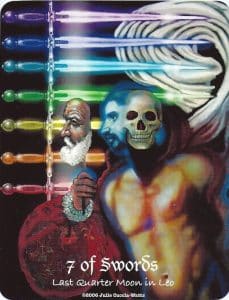 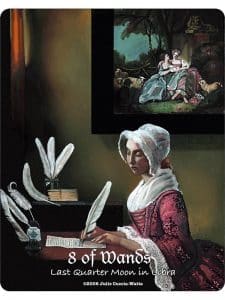 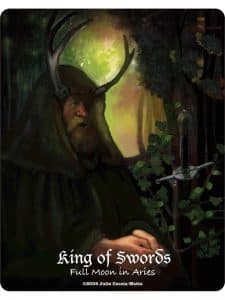 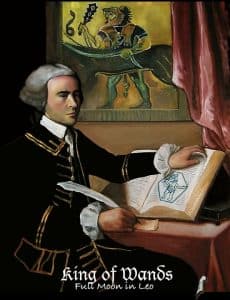 Another great find in this tarot deck review is that it follows the no-frame trend, allowing all the beauty of its images to bleed up to the card’s edge. The court cards: King, Queen, Knight, Page, are replaced by Princess, Prince, Queen, and King, giving a far more familiar connotation to these minor trumps than the usually servile approach.

Accompanied by a hardcover book, this deck compiles all the artist’s intuitive and divinatory journey, with an extensive bibliography that will help the reader in the interpretation of analogies and changes made in this particularly unique creation.

However, you will find the traditionally 22 Major Trumps: The world, The fool, The Wheel of fortune… But, some cards have their name slightly changed, nothing you cannot handle. The real challenge is presented mainly through the images.

The suits are named Coins, Swords, Cups, and Wands as we expect in any deck, and some of their images convey with greater clarity the card spirit than the Traditional Rider-Waite’s.

I won’t deny it; it’s going to be a challenge, but a quite fun and enriching one for the advanced tarot reader. This is undoubtedly a system influenced by traditional decks, but that manages to create a unique symbolic world.

It is undoubtedly a great piece to develop intuition, clairvoyance and the ability to connect meanings. This is in addition to increasing your grasp on symbolic content and enriching your knowledge about complementary disciplines.

Original, creative and beautiful to look at, this is a real collector’s item. 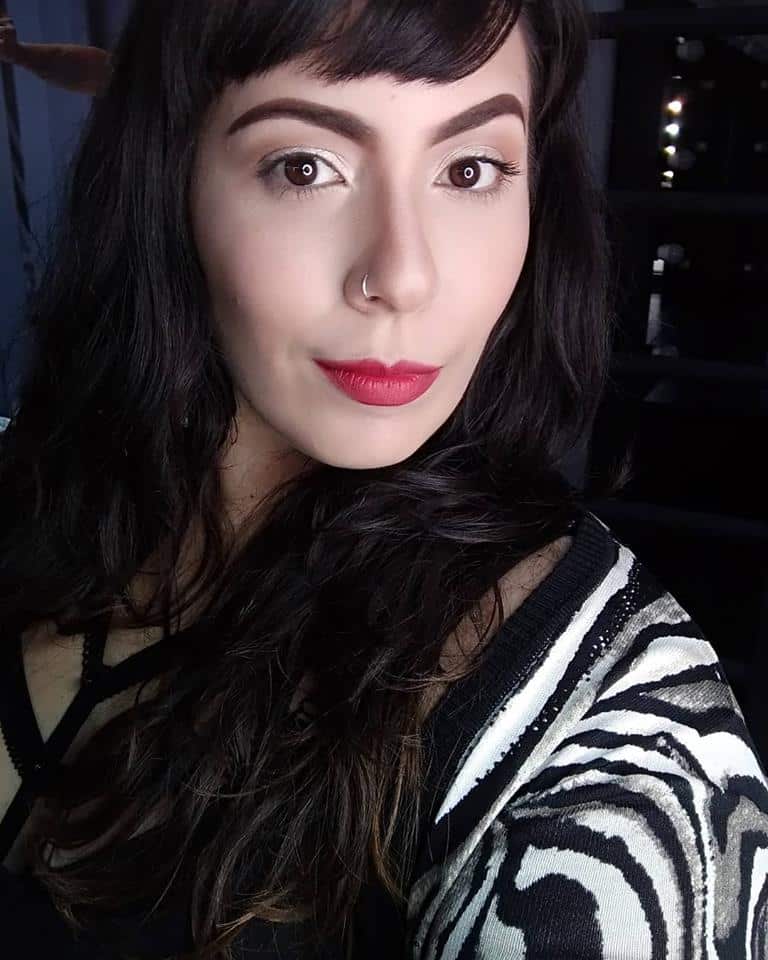 Nataly is currently studying professional Tarot Reading and her favorite card is The Moon Major Arcana. She has a degree in Political Science and a Master in Political Communication.
Read More Here >