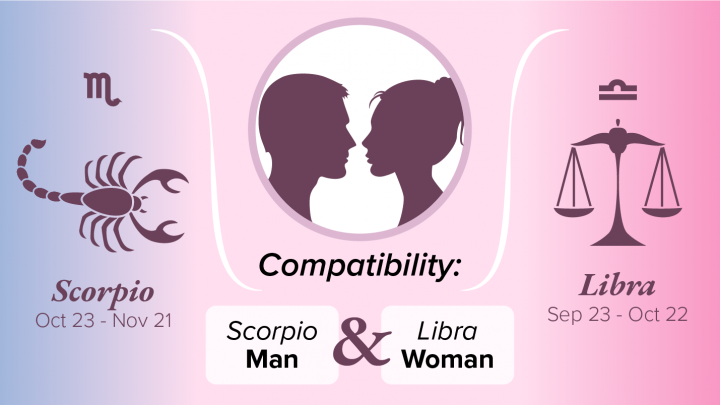 A Scorpio man and a Libra woman combination are not naturally compatible with one another. They see the world and their relationship in very different ways.

Although this couple are mismatched, both of them share a desire for relationships and are loyal to their partners.

This means that if they get together, they will be motivated to stay together. This motivation can overcome their natural incompatibility.

In analyzing the compatibility between zodiac signs, signs that are next to each other in the zodiac are among the more difficult combinations.

This is because each sign can be seen, at least in part, as a reaction to the excesses of the previous sign.

Libra is a sign devoted to balance and harmony. One of the trademarks of this sign is a desire to avoid conflict at all costs.

Because we do not live in a perfect world, deep intimacy with another often involves conflict and dealing with unpleasant emotions.

Scorpio craves such deep intimacy and does not mind delving into deep and dark places if it is necessary to achieve it.

The differences in the nature of these two signs create constant tension between harmony and depth and between courtesy and honest communication.

If you want to feel that incredible, wonderful connection with your Scorpio man, then the Scorpio Man Secrets “Roadmap” is the most comprehensive guide ever created to understanding a Scorpio man.

A Scorpio man is deep and intense.

Anything that he does, he does fully and completely. Passionate and determined, he will see a project through to the end.

There is often a mysterious air to him, and it is unusual for a Scorpio man not to have secrets. He also has access to the secrets of those around him.

He can be fearlessly honest, while at the same time, never reveal anything he does not choose to.

A Scorpio man is fiercely loyal to those that he cares about, and he expects the same loyalty in return.

He will stay with a partner through thick and thin, but he can cut someone out of his life completely, especially if he thinks that he has been betrayed.

A Scorpio man is prone to jealousy, which is one of his worst faults.

A Libra woman is charming and graceful.

She enjoys meeting new people, and she is able to carry on an intelligent conversation with almost anyone.

She is courteous and polite, and to her, rudeness is the worst sin imaginable.

A Libra woman has no qualms about being disingenuous or even telling an outright lie if it is necessary to be polite or to avoid conflict.

A Libra woman needs relationships, and she does not like to be alone.

On the other hand, she gets very nervous with unpleasant emotions, and this limits her ability to be fully intimate.

Furthermore, Libra is an Air Sign, which means that she prefers the rational to the sentimental.

She likes romance, but for her, it is about artistry rather than passion.

A Libra woman has a tendency to flirt, even when she is in a committed relationship.

She is not especially prone to infidelity, but she enjoys the verbal exchange involved in flirting.

A Scorpio man and a Libra woman do not have much in common.

On the other hand, Scorpio is traditionally ruled by Mars, and Libra is ruled by Venus.

Mars and Venus have a natural attraction for one another, which will create stronger chemistry between these signs than they would otherwise have.

She will be fascinated by his mysterious nature, and he will be drawn to her charm.

If a romance develops between these two signs, it will be hot and passionate, but it can also be rather stormy.

A Scorpio man notices everything, particularly when it comes to someone he has feelings for.

He will see through any attempts on her part to avoid conflict by being less than truthful.

A Scorpio man is one of the few signs that is immune to her skills at diplomacy, and conflicts could easily develop that she will not be able to sidestep.

The sexual compatibility between a Scorpio man and Libra woman is mixed.

On the one hand, there is a great deal of chemistry between them. On the other hand, they differ greatly when it comes to their wants and needs with respect to sex.

A Scorpio man needs a deep emotional connection. He wants to penetrate a woman’s heart as well as her body.

A Libra woman wants a more cerebral and intellectual connection. She is uncomfortable with the depth of contact that he craves.

They will need to compromise if they want to be able to satisfy each other.

He will need to accept less intensity than he desires, and she will need to step outside of her comfort zone with respect to emotional intimacy.

Both a Scorpio man and a Libra woman will be dedicated to their marriage.

A Scorpio man is loyal to his family, and a Libra woman will do a lot in order to maintain her relationship.

Despite their determination, there will be many difficulties for them to overcome.

Unlike many incompatible pairs, there is chemistry between these two signs.

In one sense, this can create a bond between them. In another sense, it can mask their deep differences.

The main difference is in the way that they see relationships. For a Scorpio man, relationships are a source of deep emotional bonding.

Whether a Scorpio man knows it or not, he really wants a psychic connection with a partner.

For a Libra woman, however, a relationship is a dance. As in a dance, there is a balance between separation and togetherness.

She enjoys the harmony and artistry of moving in concert with someone else.

Both of these ways of being together are valid and can be the basis of a good marriage.

On the other hand, they are not the same. These two have very different underlying assumptions.

Because these differences are at the level of such deep underlying assumptions, this couple may not be sufficiently aware of them making it hard for them to negotiate and compromise.

This can create a situation in which the way they relate to each other is slightly off, like two puzzle pieces that seem they ought to fit together but don’t.

If this couple is to be happy together, they both must be extremely self-aware and willing to accept that they may not see eye-to-eye on important aspects of their marriage.

If a Scorpio man and Libra woman have children, it will be doubly important for them to come to terms with their differences.

They will both be very good parents separately, but if they can not come together as a couple, it can negatively impact their children.

If they can work through their differences, though, they will be able to balance each other well.

He will have deep insight into his children’s emotions and needs. She will be able to mediate any conflicts between family members and to soften his intensity.

Whether they are coworkers or a married couple trying to do a project, a Scorpio man and a Libra woman will generally not work together at all.

As a Fixed Sign, a Scorpio man has very set ideas about how everything should be done, and he can be extremely stubborn.

A Libra woman will not dispute with him. Instead, she will quietly go off and do things in her own way.

Aside from the very different way that they see relationships, there is one major problem that could lead to fights between a Scorpio man and a Libra woman.

This problem is that a Libra woman likes to flirt, and a Scorpio man is prone to jealousy.

She enjoys social interaction, and flirting is a natural part of that.

A Scorpio man is likely to be aware that she means nothing when she flirts with other men.

It is common for Scorpio men to have some empathy, so he will be able to sense the truth of the matter.

That will not prevent the jealousy within him from rising to the surface, and this could turn into a huge battle between them.

A Libra woman does not get mad easily, but when she does, she can have a very bad temper.

Honest communication will be the key to avoid these fights. It will also be essential for both of them to avoid becoming defensive and making accusations against each other.

A pairing between a Scorpio man and a Libra woman is a difficult one.

Yet, both of them are loyal and devoted when they are in relationships. This could lead them to stay together even if they are unhappy.

On the other hand, it could also give them the motivation to engage in honest communication and to work towards understanding and compromise.

With this communication and compromise, they can have a successful relationship that stands the test of time.