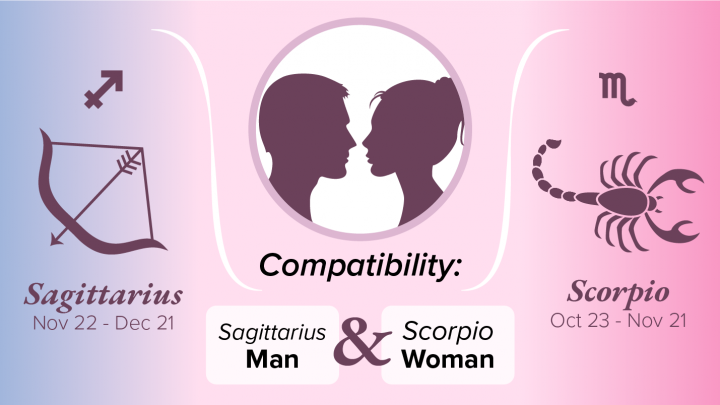 The match between a Sagittarius man and a Scorpio woman combination is a difficult one.

Scorpio is a deeply introspective sign that can get lost in her own emotions. As a reaction to Scorpio, Sagittarius seeks freedom and desires to explore new territory.

The natural inclination of these signs is to work at cross purposes. This makes it unlikely that a Sagittarius man and Scorpio woman will get together at all.

The signs of the zodiac progress in an alternating pattern. This pattern is the same as that of night and day or of yin and yang.

For this reason, with a few exceptions, the compatibility between signs that are next to each other in the zodiac tends to be low.

Yet, when it comes to relationships, natural compatibility is just one part of the picture.

Mismatched combinations may be the exception, but they do happen. When they do, the relationship is often quite strong, because the couple has decided to be together in spite of their differences.

In the case of a Sagittarius man and a Scorpio woman, the key to the success of this relationship hinges on whether he decides to stay.

If you want to feel that incredible, wonderful connection with your Sagittarius man, then the Sagittarius Man Secrets “Roadmap” is the most comprehensive guide ever created to understanding a Sagittarius man.

A Sagittarius man is a wanderer and an explorer. Easily bored and often restless, he does not like to stay in any one place for very long.

There is a characteristic boyish charm to a Sagittarius man, and he is genuinely likable.

He can be honest to the point of rudeness, but because of his charm, few people get angry with him no matter what he says.

A Sagittarius man often has an interest in philosophy, and he likes to explore new ideas as well as new places.

A Sagittarius man is famous for his reluctance to enter into committed relationships.

He prefers casual encounters that do not restrict his freedom in any way.

If he is to settle down with a woman, it needs to be someone who can hold his interest and who can keep up with him in his travels.

He will react badly to possessiveness or jealousy in a prospective partner.

A Scorpio woman is introspective and is capable of deep emotions.

Anything that she does, she will do fully and completely. She does not believe in leaving anything half-done.

A Scorpio woman has great courage, and she is unafraid to face difficulties head-on.

She has an uncanny ability to read people, and many Scorpio women are psychic, whether they are aware of it or not.

She can become almost too serious at times, and she can get lost in her projects to the point of obsession if she is not careful.

A Scorpio woman craves intimacy. Because of her powerful and sometimes stormy emotions, she benefits by a partner who is steady and stable and who can be an anchor for her.

She is fiercely loyal, but she is prone to becoming jealous and possessive.

In most cases, a Sagittarius man and a Scorpio woman will simply not be interested in each other.

It takes a long time for a Scorpio woman to warm up to a man, and a Sagittarius man generally does not stay in one place long enough for her to do so.

A Scorpio woman is able to form deep bonds with a man, which means that she must be very careful if she is to avoid getting hurt.

Because of this, she usually maintains barriers around her soul and tests a prospective partner to see if he will stay around.

A Sagittarius man will rarely proceed in the face of resistance, so he is very likely to wander off.

There is one thing that might draw them together, though.

A Sagittarius man is known for a great sense of humor. Even though she is very serious, a Scorpio woman has a sharp wit.

If these two sit down and talk with each other, they will find each other amusing and interesting to talk to. This could lead to a romantic relationship.

A sexual relationship between a Sagittarius man and a Scorpio woman could prove problematic.

These two have very different ideas about sex. For him, sex is an adventure, and he is more interested in physical sensation than emotional connection.

For her, sex is a way to bond more deeply with a partner. The first few encounters may be fun for both of them, but over time, she will probably want more than he can give.

As with many other incompatible pairs, in most cases, a relationship between a Sagittarius man and a Scorpio woman will not last long enough for them to marry.

Furthermore, a Sagittarius man is notoriously reluctant to marry, even when he is with a woman who is highly compatible with him.

This means that if a Sagittarius man and a Scorpio woman do marry, they have a decent chance of staying married.

To get to this point, they will have had to iron out many of their differences.

Even so, they will still face challenges, the biggest of which will be his restlessness.

If he is to stay, they will need to find ways to give him the freedom to travel.

While they may be able to travel together, he will still need to go off by himself from time to time.

It will be hard for a Scorpio woman to handle this, but it will be the best thing for their relationship.

One of the things that will make this easier is that he is so honest. It is almost impossible for him to manage a lie.

He will certainly not be able to lie well enough to fool a Scorpio woman. This will mean that on an intellectual level, she will know that she can trust him.

It will still be hard for her to overcome her tendency towards possessiveness, however.

If a Sagittarius man and a Scorpio woman have children, it will be important for him to shoulder his fair share of the parenting duties, especially the unpleasant ones.

He may feel confined when the children are small, tempting him to spend even more time wandering than he usually does.

If he does this, she will take on even more of the burden than she would otherwise, but she will begin to resent him.

If he takes his role as a father seriously, though, he will balance a Scorpio mother with humor and lighthearted playfulness.

It will be a challenge for a Sagittarius man and a Scorpio woman to work together.

The biggest issue they will have is the difference in their attention spans.

A Scorpio woman is capable of focusing completely on a task until it is done, no matter how long it takes.

A Sagittarius man gets bored very easily. Because of this, it will be tempting for her to do her work without him.

The problem with this is twofold. The first is that she may end up resenting him terribly.

The second is that if they truly work together, they will balance each other well.

She can help give him direction and focus, and he can help her relax and take things less seriously.

The biggest difficulty that a Sagittarius man and a Scorpio woman will face as they try to build a relationship together will be managing their very different needs.

He really does need his freedom. Without it, his spirit will wither, and he will become restless and irritable.

Likewise, she needs emotional intimacy and closeness. Without these things, her life will feel empty, and she can become prone to depression.

With many other couples, a compromise might be the key, but with this pair, it will lead to unhappiness for both of them and may be the source of their fights.

This unhappiness could make their relationship volatile and unstable.

If they are to stay together, they will need to be creative in finding ways for them both to be happy.

One solution is for him to have the freedom to come and go as he needs to and for her to have other friends outside of the marriage.

In order for this to work, though, they will need to accept each other without judgment.

They will also need to be comfortable with a relationship in which both of them get some of their needs met outside of it.

A Sagittarius man and a Scorpio woman is an unlikely pair.

They will have to work hard and be creative if they are to be happy together.

On the other hand, all relationships require hard work and creativity.

If they decide that they want to be together in spite of their differences, their desire to do so will overcome their natural incompatibilities, and they will be able to sustain a successful relationship.