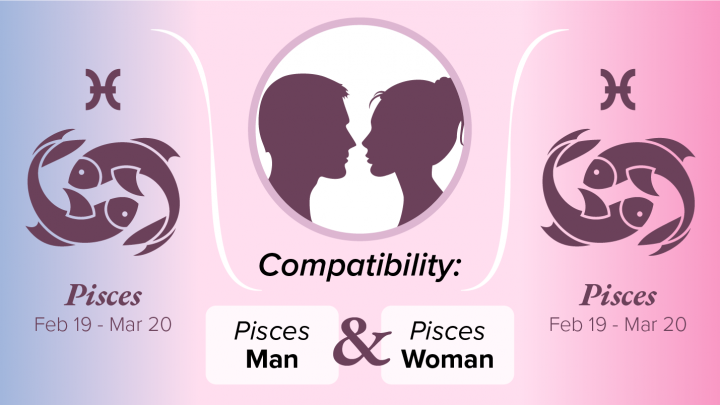 Whenever there is a couple with two people of the same sign, the energy of that sign becomes magnified. In determining whether these two are compatible, it is necessary to analyze the nature of the sign itself and how its natives behave in relationships. In the case of a Pisces man and Pisces woman, they will be devoted and loving. They will care deeply about each other, and they are likely to form a psychic, and perhaps even spiritual, connection.

The problem is, however, that they are likely to have a lot of trouble managing the practical considerations of building a life together. In relationships, Pisces usually relies on their partners to take control of the day to day operations of their lives. While a Pisces native can come down to earth, and often will for someone they love, they are not happy. They become the proverbial fish out of water.

If they can find a way to share the necessary responsibilities of life so that neither of them is excessively burdened with them, they can do well together.

If you want to feel that incredible, wonderful connection with your Pisces man, then the Pisces Man Secrets “Roadmap” is the most comprehensive guide ever created to understanding a Pisces man.

When determining the nature of a sign, is it often useful to look at the basic components of each sign. Signs are divided into Element and Mode. The Elements are Fire, Earth, Air, and Water. Each of the Elements can be further divided into two axes. These axes are hot/cold and wet/dry. Hot and cold is the easiest axis to explain. In addition to the amount of physical heat, it also refers to the activity level of the signs. The wet and dry axis is a little more abstract, but it can also be seen on a physical level. Moisture binds things together, and dryness separates them. On a more symbolic level, elements that are wet make connections and pay attention to how things are similar. Elements that are dry make distinctions and pay attention to how things are different.

Pisces is a Water Sign, and Water is cold and wet. Water Signs have a low natural activity level and blur distinctions and differences. The Mode of Pisces is Mutable. Mutable Signs end each season, and their job is to let go and make room for the coming season. As Mutable Water, Pisces is the most amorphous and changeable sign of the zodiac. In many ways, Pisces is a chameleon who takes on the color of his surroundings.

Most astrologers think that the difference between the genders is along the hot/cold axis. This does not appear to have any basis in the actual differences between men and women that have been discovered scientifically. Instead, the actual differences seem to be along the wet/dry axis. All other factors being equal, women tend to be more intuitive and better able to make connections than men; in other words, wetter. Men tend to be more analytical and logical; in other words, drier. This means that masculine energy gives Pisces men more solidity than Pisces women and moderates some of the excesses of this sign.

On the other hand, the natural qualities of Pisces tend to be associated more with femininity than masculinity. This means that a Pisces man is likely to suffer more social stigma and have more difficulties accepting himself than a Pisces woman will.

If masculine energy moderates the nature of Pisces, feminine energy enhances it. A Pisces woman is the archetypal fairy tale princess that is gifted with beauty and charm but often needs to be rescued. Societal expectations surrounding femininity have changed over recent decades. For some signs, such as Aries, Scorpio, and Capricorn, these changes have made it easier for these women to express their true nature. For a Pisces woman, however, these changed expectations have made their lives more difficult. In particular, the sense that women should be able to manage a career while doing the lion’s share of the domestic chores necessary to run a household is extremely difficult for a Pisces woman.

When looking for a partner, a Pisces woman seeks someone who will accept her as she is and who can provide her with grounding and stability.

If a Pisces man and a Pisces woman meet, they will recognize each other as the kindred spirits that they are. They will be able to understand each other in a way that most other signs cannot. Pisces tends to have relatively weak boundaries, so once they start a conversation, it is likely to continue for a long time.

While they will instantly connect with each other, they are more likely to become good friends than relationship partners. This is because Pisces, men and women, instinctively seek drier signs for romantic partners, which are all of the other signs in the zodiac.

On the other hand, no person is only one sign. Everyone has at least some mixture of sign combinations, and one or both of them may have more practical signs in their overall astrological makeup. This will be important if their relationship is going to go anywhere. Someone will have to take the lead to move things along.

Pisces has a deeply emotional nature, and they are able to bond with a partner body, mind, and soul. Because of this a Pisces man and a Pisces woman may be able to give each other the intimacy that both of them crave. On the other hand, they may not fit together as well as they would like. This is because they are both extremely receptive. For a true intimacy, it is necessary to have an active and a receptive partner, emotionally as well as physically. They may have to take turns assuming the more active role.

It will be hard for a Pisces man and a Pisces woman have the initiative to actually marry and set up a household together. A Pisces woman will have a greater desire to marry, and a Pisces man will usually have a greater ability to move things along in their relationship. On the other hand, unless one or both of them have more dry energy than the average Pisces, it is hard to imagine how they would arrange a wedding, let alone work out how they will live together.

Still, assuming that one or both of them do have enough dry energy to marry, they will do well together. Pisces does tend to become more practical when they are in a couple, which will also help. On the emotional level, they are both loving and understanding. They will be able to intuitively understand each other and to communicate without talking.

Children may be a challenge for them. They are both loving and devoted parents. The problem is that it will be hard for both of them to set limits or discipline the children. So, unless they have exceptionally well-behaved children, they may be in for a struggle. On the other hand, most people, even children, instinctively want to protect Pisces natives and are reluctant to upset or disappoint them. This will make it more likely that the children will want to be good to please their Pisces parents.

It is hard to imagine how two Pisces natives will get anything done when they work together. Pisces is often a very intelligent sign. Many people who have been recognized as geniuses, including Albert Einstein, have been Pisces natives. The problem is that the excessive moisture of this sign makes it hard for them to turn their visions into reality without another sign to provide structure and form.

They will do much better if they are in a team with another sign, preferably one of the dry signs, which are the Earth and Fire Signs. In such a situation, both of them will provide brilliant and insightful ideas, and they will do an excellent job brainstorming together.

Pisces is an emotional sign, but it is not an aggressive one. This means that they generally do not fight with anyone, including each other. On the other hand, if a Pisces man and Pisces woman try to build a life together, one or both of them will need to come down from the clouds. The material world is a hostile place for Pisces. A Pisces native is capable of handling practical skills if they have to, but it is exhausting for them. If they have to do it for too long, they get irritable. This irritability will cause them to pick fights with the other.

It will be important for a Pisces man and Pisces woman to be aware of this danger. The more acceptance that each of them has of their fundamental nature, the easier it will be to find creative ways to manage it. In the present age, there is a fair amount of technology that can help to navigate the practical aspects of life. Such technology would make a good investment for this pair.

A Pisces man and a Pisces woman can be a very loving and devoted couple. On the other hand, it will be necessary for them to find a way to manage the practical aspects of life. If they are able to do this, they can have a long and happy life together.