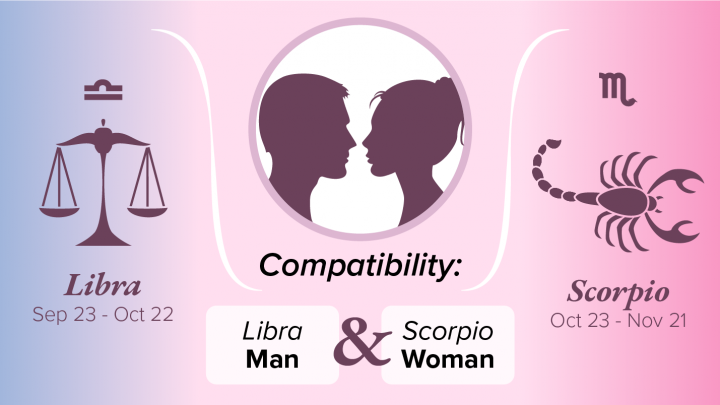 A Libra man and Scorpio woman are a difficult combination with low compatibility.

Signs that are next to each other usually have trouble getting along, and this is a particularly volatile pair.

Despite this, a Libra man is skilled at the art of relationships, and a Scorpio woman is steadfast and fiercely loyal.

These qualities will be enough to overcome this couple’s natural incompatibility if they choose to be together.

In many cases, adjacent signs do not get together at all, but there can be a strange attraction between a Libra man and a Scorpio woman.

The reason that this couple is so volatile is that these two are working at cross purposes.

A Libra man wants to keep relationships pleasant and will happily sacrifice depth to achieve harmony.

A Scorpio woman craves a deep bond, and she will fearlessly dive into dark and gloomy places in order to achieve that end.

If you want to feel that incredible, wonderful connection with your Libra man, then the Libra Man Secrets “Roadmap” is the most comprehensive guide ever created to understanding a Libra man.

A Libra man is charming and pleasant. His social skills are impeccable, and he is a natural diplomat.

More than anything else, a Libra man seeks harmony and balance.

He does not want to rock the boat, and conflict makes him exceedingly uncomfortable.

As much as a Libra man would prefer all of his interactions to be courteous and conflict-free, human beings are messy.

It is not always possible to be honest and polite, and intimate relationships can uncover unpleasantness.

For this reason, in his desire to maintain harmonious social interactions, a Libra man often must sacrifice honesty and intimacy.

A Libra man is usually stable in his relationships, but he does tend to flirt a lot. This is part of his nature.

Such flirtation rarely leads to anything serious, especially if he is already in a committed relationship.

The hallmark trait of a Scorpio woman in intensity. When she does something, she does it fully and completely.

There is no such thing as half-way for a Scorpio woman.

Scorpio has an unfortunate reputation, and there are Scorpio women that have a fascination for darkness.

On the other hand, a Scorpio woman is just as likely to be passionate about doing good work and helping others.

In relationships, a Scorpio woman desires intimacy above all else.

She has the capacity to bond deeply with another, and she is satisfied with nothing less.

In many cases, a Scorpio woman is psychic, and even if she is not, she can spot a lie a mile away.

There is nothing that will bother her more than sensing inconsistency between another person’s words and the emotional signals that they are broadcasting to her.

A Scorpio woman is fiercely loyal and devoted to a partner.

She is prone to jealousy, however, which can create conflict in her relationships.

While a Libra man prefers courtesy and polite conversation, there is a side to him that is fascinated with the unusual and exotic.

A Scorpio woman often has an air of mystery and danger to her. This will both repel and attract a Libra man.

Even though Libra and Scorpio are adjacent signs and do not have much in common, Libra is ruled by Venus and Scorpio is traditionally ruled by Mars.

Venus and Mars have a natural attraction to each other. This means that there is a great deal of chemistry between these signs.

On the other hand, the main difficulty between these signs will become manifest very early on in the relationship.

He does not want to know her deep, dark secrets, nor does he want to share his own.

If they are to move forward with their relationship, they will need to reach a compromise that will likely be uncomfortable for him and unsatisfying for her.

A Libra man and Scorpio woman have mixed compatibility in the bedroom.

However, the chemistry generated by the interaction between Mars and Venus does make for an exciting sex life that could overcome his discomfort with her intensity.

Scorpio is known as a “sexy” sign, but for a Scorpio woman, sex is not just physical.

Scorpio desires intensity and intimacy. She wants to bond with someone body, mind, and soul.

Libra likes polite relationships, and he actually becomes slightly aloof and detached when it comes to sex.

Everyone has parts of them that are less than pleasant and emotions that they would prefer did not surface.

Deep intimacy often reveals these parts and emotions, and this is why a Libra man is often uncomfortable with it.

This means that if they do marry, the marriage will generally be a good one.

With a Libra man, Scorpio woman pair, the attraction and chemistry between them are strong enough to bring them together in spite of their differences.

This chemistry could sustain their relationship long enough for them to marry. The problem is that even the most intense chemistry fades over time.

When this happens, the deep differences between these signs will become even more apparent.

This is further complicated by the tendency of both of these signs to take marriage vows very seriously.

This means that they will stay in the marriage even if there are problems.

If they are not careful, this could lead to a volatile marriage and deep dissatisfaction on both of their parts.

If they are to be able to enjoy their life together, they will need to work hard to understand each other, and they will have to reach many compromises.

The biggest compromise they will need to make concerns the tension between courtesy and intimacy.

This gives these two a chance to find a middle ground that they will both be happy with.

A Libra man and Scorpio woman as parents

The differences between this pair will also be apparent in their parenting styles.

This could make it difficult for them to present a united front to the children.

On the other hand, their differences can balance each other well.

A Libra man will teach their children social graces, and he will be able to mediate conflicts in the family.

A Scorpio woman will be able to talk with the children about anything, even topics that are uncomfortable.

She will also know when they are trying to keep secrets from their parents.

Working together will be extremely difficult for a Libra man and Scorpio woman.

Libra is a Cardinal Sign, and thus, likes to take charge and initiate change.

Scorpio is a Fixed Sign, and thus, would prefer to have nothing to do with change and wants everything to stay the way it is.

Cardinal Signs and Fixed Signs often balance each other, but it is a little more complicated with a Libra man and a Scorpio woman.

Although a Libra man likes to take charge, he does so in an indirect manner.

This will drive a Scorpio woman to distraction. She does not like change in the first place, and she hates feeling manipulated.

If they are to work together at all, he will need to force himself to be more direct, and she will need to develop a tolerance for indirect pleasantries.

A Libra man, Scorpio woman relationship has the potential to be quite volatile.

In addition to the tension between courtesy and intimacy, there is one more potential pitfall which could lead to fights.

This pitfall comes from his tendency to flirt and her jealousy.

Jealousy is one of the worst faults of a Scorpio woman. Even when she knows that her relationship is safe and that her jealousy is unwarranted, it still creeps up on her.

Depending on one’s perspective, casual flirtation may or may not be a fault, but it is something that is as natural to a Libra man as breathing.

The combination of his flirtation and her jealousy can become explosive.

There is no easy solution to this problem. If they are going to get through it, they will need to have honest and open conversations about it.

If they are to reach a middle ground, they will both have to step outside of their comfort zones quite a bit.

A relationship between a Libra man and a Scorpio woman is a challenging one.

There is a lot of chemistry between them, but they are also different in ways that are difficult to resolve.

Yet, with honesty and compromise, these two can have a lasting and fulfilling relationship.

It’s better forget about it 😊