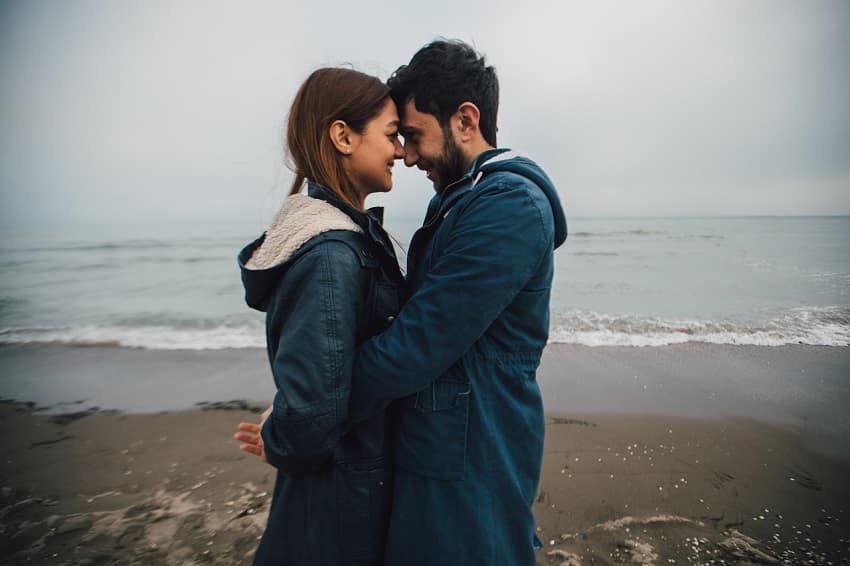 A Sagittarius man needs and loves freedom. This matters more to him than anything else in the world. He is generally pleasant and easy-going. Just as he needs freedom himself, he makes very few demands upon others. He is open and honest to the point of being blunt or even rude. Very few people take him to task for his bad manners, though, because of his natural charm.

While he is interested in love as a philosophic concept, he is reluctant to form emotional attachments. The reason for this is that they may impede his freedom. If he is to form a relationship, first and foremost, his partner must be interesting. She must also not make too many emotional demands upon him.

The ideal partner for him is someone who enjoys adventure and who values her freedom as well.

An Aries woman is strong and independent. She can take care of herself. She has quite a temper, but it burns hot and cools off fast. Unafraid of taking the initiative, she is just as likely to ask a man out as to wait for him to ask her out. An Aries woman is attracted to strength in men, but she also does not want a man who wants to control her in any way.

An Aries woman does not fall in love easily. She does not really feel like she needs a man in her life. If she does fall in love with someone, however, she will be a loyal and devoted partner to him.

A Sagittarius man and Aries woman will like each other immediately. Her strength and independence will fascinate him, and his cheerful and fun-loving demeanor will disarm her wariness. There will be no coy games or flirting between the two of them. Instead, they will tell each other exactly how they feel about each other from the beginning.

Their dates will be very active and fun. Neither of them will enjoy sitting still through dinner and a movie. An Aries woman will be one of the few women who does not make any demands of him other than his company. She is not needy or clingy in any way. He, in turn, will be happy for her to be just the way she is. He will enjoy her taking the lead, and he is easy-going enough to follow with seeming weak or submissive.

They will both be more interested in intense physical sensations than they will be in forming emotional bonds.

While a Sagittarius man and Aries woman will get along with each other very well and can build a lasting relationship, they may not get legally married. This is because Sagittarius men can be almost allergic to the very idea of marriage. For them, marriage seems like a huge restriction on their freedom. An Aries woman may want to avoid marriage as well because she will not feel comfortable with the idea of herself as a wife.

Even though they may not officially tie the knot, it is very possible for a Sagittarius man and an Aries woman to stay together for life. Their relationship may be a marriage in everything but name.

Unless one or both of them have religious or moral scruples against it, it is almost certain that they will live together for a long time without getting married. If they do finally get married, it is likely to be because of legal or financial reasons rather than because either of them feels a romantic need for it. Their wedding will probably be quite unconventional.

Whatever the official status of their relationship may be, it will be a good one. They both understand each other very well. They also have a very similar energy level. Travel is likely to be one of their favorite activities together, and they will do so as much as they possibly can.

A Sagittarius man and Aries woman as parents

A Sagittarius man and Aries woman may very well choose to remain childless. He will not want to be tied down, and she does not have a very strong maternal instinct. If they do have children, how they do as parents will depend on the nature and the temperament of the children. They will give their children many interesting and exciting experiences, including lots of travel. On the other hand, they will not generally be very consistent. Children who need a lot of security or emotional support may struggle in this household.

She will be much stricter than him. A Sagittarius man can be extremely indulgent with his children. He would much rather play with them and make them laugh than to provide them with discipline and structure. This could upset an Aries woman, especially if she feels like she is always cast in the role of the heavy.

A Sagittarius man and Aries woman can work together very well. She is very good at taking the initiative and getting things going. He has a lot of energy, and he will not try to fight her for control. They are both fire signs and they share many of the same values.

The major difficulty will be is that a Sagittarius man does not necessarily have a very strong work ethic. He gets bored easily, and he would prefer to play rather than work. This could be very upsetting to an Aries woman, especially if she feels like he is dumping all of the work on her.

An Aries woman is quite willing to work hard, but she also has a deep sense of fairness. If she feels like she is doing all of the work while he is off enjoying himself, she will begin to resent him.

A Sagittarius man and Aries woman will generally have a very harmonious relationship. Most of the time when they fight, it will be playful banter and not anything serious. There are a few areas of potential conflict between them, however.

As discussed earlier, a Sagittarius man is prone to avoid responsibility for the mundane chores necessary for life. He wants to do what he wants when he wants, and he is rarely interested in domestic chores or obligations.

An Aries woman is not extremely domestic either, but if there is something that needs to be done, she will do it. This could result in her taking the lion’s share of their mutual responsibilities. If this goes on for any length of time, she will resent him quite a bit.

The obvious solution is for the Sagittarius man to take on his fair share of the division of labor. The other is for her to simply not do things if she is going to resent doing them. This may mean that things get left undone, but this is not the end of the world.

A Sagittarius man is generous, but this generosity if taken to excess, could easily lead to financial trouble. It is unlikely he will keep very good track of his money, as this is not very interesting or exciting to him.

An Aries woman is not very interested in keeping up with the finances either, and they both like to take risks. This could lead them into difficulty, which will put a stress on their relationship.

It may be well worth their while to invest in a financial advisor, or at least in software to help them automate things like bill paying and knowing how much money they have.

A Sagittarius man and Aries woman are a very good match. They understand each other well. She does not threaten his freedom, and he does not try to tell her what to do. While they may not get formally married, they have the ability to lead a long and happy life together.

If you want to feel that incredible, wonderful connection with your Sagittarius man, then the following information is the most important that you will read on the entire internet.

Devoted astrologer and relationship consultant Anna Kovach teaches that there are simple techniques you can use to make it HIS idea to chase you, love you and commit to you. Most women make mistakes that push Sagittarius men away.

While the compatibility analysis above should help, Anna’s exclusive Sagittarius Man Secrets “roadmap” works like clockwork on almost every Sagittarius man out there. It is without doubt the most comprehensive guide ever created to attracting, dating, and having a deep, loving relationship with a Sagittarius man.