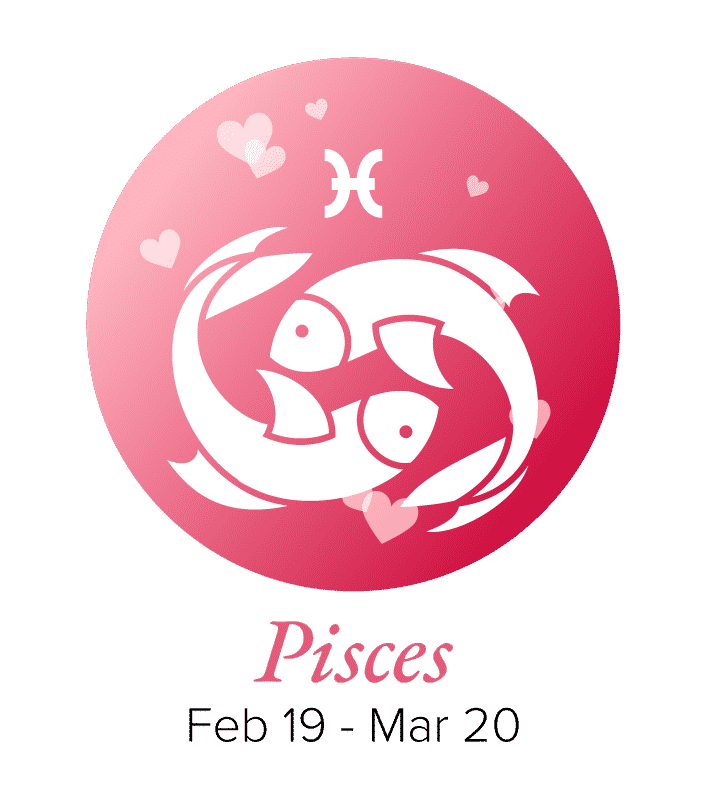 Pisces is a deeply romantic sign that loves to be in love. Natives of this sign are capable of deep intimacy and devotion to a partner and can easily lose themselves in a relationship. Yet, not all signs want the level of intimacy that Pisces craves.

In terms of Pisces compatibility, their best match is someone who appreciates their sweet and caring nature.

Please keep in mind that everyone can vary from their sun sign due to factors such as an individual’s planet positions at birth. Therefore, Pisces compatibility can vary and it is best to consult an astrologer to fully understand a potential relationship.

However, our guide below will give you a good idea of the best and worst Pisces matches, so read on!

The Pisces compatibility table below displays each zodiac matches with Pisces in terms of Overall compatibility, Sex, Love and Marriage, and Communication.

The percentages are based on traditional wisdom as to the relationships between each zodiac sign. They are also based on the nature of each sign, as well as observation and experience. Below are the zodiac signs that Pisces are most compatible with and match the best matches.

Cancer is considered the best match for Pisces. Both share a love for intimacy, and they are capable of a deep emotional bond. These two also understand each other intuitively, and sometimes, they can seem to communicate on a psychic level.

Even though these Cancer and Pieces are very compatible, they also have important differences that complement and balance each other. Cancer is a natural caregiver, with a deep need to nurture others. This sign is also highly domestic and can accomplish a great deal on a practical level. On the other hand, Cancer worries a great deal and can become moody and irritable at times.

Pisces is a sweet and gentle sign, with a natural ability to soothe turbulent emotions. This sign is easy-going and can adapt to most circumstances. Although Pisces is very sensitive, most of the time this sign is relaxed and able to go with the flow. Pisces tends to be quite spiritual, but also tends to have some difficulty managing the material world.

Another great match for Pisces is Scorpio. A Pisces/Scorpio combination is very similar to one between Pisces and Cancer. Pisces and Scorpio are capable of forming a deep emotional and even psychic bond. Like Cancer, Scorpio can communicate with Pisces on an almost telepathic level.

In some ways, being with a Scorpio native allows a Pisces native to truly express the loving and forgiving nature of this sign. Pisces is capable of deep compassion and kindness, which can extend to self-sacrifice.

While Pisces natives are able to defend themselves if they must, the need to do so can create callouses and mar the pure, generous spirit of this sign. Yet, with a Scorpio protector, Pisces can shine. In return, Pisces can provide a safe haven for Scorpio, whose nature can sometimes take them into dark and dangerous places.

Virgo and Pisces are very compatible. Virgo is the opposite sign of Pisces which means they are the natural partners for each other. Even though this is true on a theoretical level, in practice, there are some opposite pairs that get along better than others.

The reason that opposite signs are compatible is that they represent polarities. They often have similarities, and they can be seen as opposite sides of the same coin.

The common theme between Virgo and Pisces is that of service and humility. Both of these signs are capable of giving to the point of self-sacrifice. Yet, the service they provide is of a different nature. Pisces gives spiritual and emotional support, whereas Virgo offers practical assistance.

The other main difference between them is that Pisces sees the big picture, but does not pay much attention to details. Virgo, on the other hand, sees details, but often misses the big picture. Each of them is strong where the other is weak, and they balance each other very well.

Similar to Pisces and Scorpio, Pisces will generally take on the domestic role in this couple. Capricorn is hard-working and strives to rise in status. While Capricorn can be loving and devoted, generally, they do not get together with someone unless there is a practical advantage to the match. Capricorn is also one of the most conservative signs.

For this reason, it might be a challenge for a Capricorn woman to see the value of a relationship with a Pisces man, who may not have a conventional career. Yet, not only can he soften a Capricorn woman, but his vision and creative ability can be a valuable asset.

It will be much easier for a Capricorn man to see the benefit of a Pisces woman, and this pair will form a very compatible relationship.

Now, let us turn our attention to the signs who are the worst matches for Pisces.

Leo and Pisces one of the least compatible couples and don’t enough in common to form a meaningful relationship. A Leo woman has a hard time respecting a man who appears weak in her eyes.

While a Pisces man has his own form of strength, it is not the kind that is generally associated with masculinity. It will be very difficult for a Leo woman to recognize his gifts. Yet, if she does, they can have a happy long-term relationship between them.

The situation is reversed with a Leo man and Pisces woman. Although they do not have much in common, she will be mesmerized by his showmanship, and he will bask in her attention. Over time, however, they will discover how different they really are.

In particular, a Leo man will not be able to give the Pisces woman the emotional support that she needs, and she runs the risk of becoming disillusioned with him. If she does, she will stop giving him the admiration that he craves.

Aquarius is one of the worst Pisces matches. Both of these signs tend to be rather unconventional, but they have a very different approach to life. Pisces is Mutable Water which means they have little sense of boundaries and tend to float through life. Often when Pisces goes against established conventions, it is because this sign is largely unaware of them.

Aquarius, on the other hand, is Fixed Air. This sign is fully aware of what the boundaries and conventions are but chooses to ignore them. There is a rigidity to Aquarius that does not exist in Pisces.

Pisces and Gemini are quite different and make a poor match. Pisces compatibility is best with a zodiac sign very similar to them. Pisces is emotional and intuitive, and Gemini is curious and intellectual.

Yet, it is the similarities between Pisces and Gemini that are problematic, not their differences. As mentioned before Pisces is Mutable Water, and because of that, this sign has few boundaries. Gemini, as Mutable Air, is also rather oblivious to boundaries. With this pair, there is no one to provide balance or stability to the relationship.

That being said, there is a great deal of sexual chemistry between these signs, and they can have a lot of fun dating each other. They will just have a very difficult time setting up a household together if the relationship becomes more permanent.

Pisces men crave to be connected, a characteristic that they share with Cancer, which makes the two an excellent match. They are also highly compatible with other fellow water sign Scorpio, with whom they often share an intensely emotional relationship.

A Pisces man enjoys long-term relationships with both of these signs, and may also find marital bliss with one of the earth signs, Virgo, Capricorn, and Taurus, who will enjoy being Pisces’ “partner in crime”. Pisces men also tend to have good sex with all of these signs, as well as others born under Pisces.

Pisces tend to be some of the most open men in the zodiac, so they enjoy good conversation, especially when they can talk about their feelings, like they can with Cancer and Scorpio.

Pisces women crave a partner who will also be their best friend, and they often find this with fellow water signs Cancer and Scorpio. They are also highly compatible with the earth signs, Virgo, Capricorn, and Taurus, who can provide a structure and directions to life that Libra women can struggle to provide for themselves.

They have good long-term relationships with all these signs, but are happiest in marriage with Cancer and Scorpio, as they can be more open with their feelings.

The same holds true in the bedroom. Pisces is compatible with all these signs, but best of all with Cancer and Scorpio.

Pisces women tend to be open and generous, which means that they can connect with almost anyone over a conversation. But when they are seeking the same in return, they most often find this with Cancer and Scorpio.

The signs with the best Pisces compatibility are Cancer, Scorpio, Virgo, and Capricorn. These signs are able to bond deeply with Pisces, and they also can provide balance and stability. The worst matches for Pisces men and women are Leo and Aquarius. These signs have very little in common with Pisces, so it is hard for them to find a connection.

It is important to remember, though, that compatibility is not everything when it comes to relationships. Often the success of a relationship depends on the dedication of both of the partners, and their willingness to bring their best selves into the relationship. Pisces is adaptable with a kind and gentle nature. These traits can go a long way towards bridging natural incompatibility.

Article Name
Pisces Compatibility - Best and Worst Matches
Description
Pisces is a deeply romantic sign that loves to be in love and are capable of deep intimacy and devotion. See Pisces compatibility with the other zodiacs.
Author
Cynthia Thinnes
Publisher Name
Numerology Sign
Publisher Logo