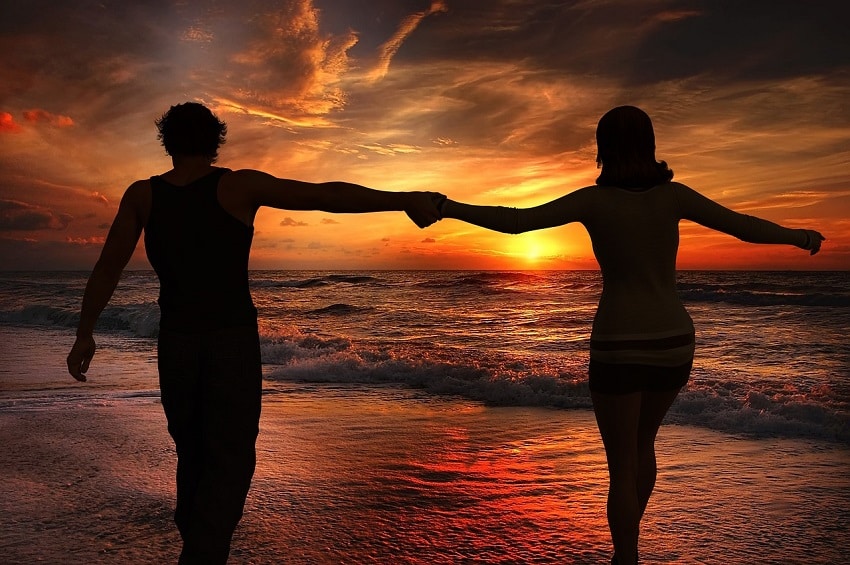 A Libra man and a Taurus woman are very different from each other. He is talkative and flirtatious, and she is quiet and steady. A Libra man is usually an extrovert, and a Taurus woman is usually an introvert. He is Air. She is Water. His energy is Cardinal, and hers is Fixed. They do have something in common though. Both signs are ruled by the planet Venus. This makes them more compatible than they would otherwise be.

Because of the common rulership, a Libra man and Taurus woman generally get along pretty well. The main difficulty they will have is that Libra men tend to be womanizers, even when they have a partner, and Taurus women are notoriously possessive and jealous.

A Libra man is extremely charming. He is so charming that women tend to flock to him. He is usually very aware of how attractive he is, and he flirts with women like it is a game. In many ways, it is a game to him. Relationships are important to him, and if he is in one, he probably will not go so far as to cheat. On the other hand, he usually will not give up flirting with others. It is too much a part of his nature.

Despite this flaw, he is an attentive partner who likes to please the woman he is with. A natural diplomat, he can defuse most conflict with a smile. His communication style is not as indirect as that of a Libra woman, but he still values courtesy over honesty. The most important thing to a Libra man is harmony and balance, and he abhors conflict and bad manners.

For this reason, even though a Taurus woman values harmony, she also values pleasure. A Libra man will go out of his way to create harmony, whereas a Taurus woman will enjoy harmony where she finds it and avoid places where there is disharmony.

A Taurus woman is materialistic and can become possessive. She is very protective of things that she sees as hers, including the people she is in a relationship with. More than most signs, she cannot abide infidelity, or even perceived infidelity.

A Libra man may or may not notice a Taurus woman. She generally does not draw attention to herself but tends to sit either by herself or with a small group of close friends off to the side. Because of this, he may very well miss her because he is flirting with more vivacious women. A Taurus woman will not go out of her way to attract a man, but she will wait for him to come to her.

If he does approach her, she may be interested in him, but she also may think that he is all style and no substance. To a certain extent, she will be right, at least in comparison to her. As Fixed Earth, she is as solid as they come. Still, it is hard not to be captivated by the charm of a Libra man, and she may find herself in love with him in spite of herself.

If they do get together, they will disagree on the speed by which to take the relationship. A Libra man tends to move very quickly, and he will want to hurry things along. There is no rushing a Taurus woman, though. She will take things at her own pace. The relationship will only progress when she is good and ready.

A Libra man is romantic and takes care to please a woman in bed. A Taurus woman will appreciate this very much. She is extremely sensual and will reward his efforts to please her. He will probably talk more than she will care for, though. She is not very verbal and prefers to get down to action.

Still, they are mostly compatible in the bedroom, and their love life will be pleasant and harmonious.

A Libra man, Taurus woman marriage can work, and it can work very well. They are both very pleasant to be with, and they share similar values. The shared Venus rulership will help them create harmony between them, despite their differences.

Even though they both want to get along with each other, they will have some things that they will need to work through. One of the biggest is the amount of social contact they both want and need. A Libra man needs a lot more social contact than a Taurus woman. She absolutely needs some time alone and being with people all of the time exhausts her. In many cases, the solution to this would be for him to go out without her. The problem with this is that she will find it hard to trust him because he flirts so much.

As parents, a Libra man and Taurus woman will be fair and kind to their children. They may find it hard to discipline them, though. Of the two, however, she will be the one who will have the greater ability to stand firm when necessary. He will have the greater ability to talk with the children and explain things to them, though. He will also insist that they have good manners. Neither a Libra man nor a Taurus woman will have much patience if the children rebel or become argumentative when they get older.

A Libra man and Taurus woman will generally work well together. He will excel in anything that requires social contact, while she will prefer to work behind the scenes. The one thing that may be a difficulty is that he will want to talk things through, and he sometimes has trouble making a firm decision about things. This will be frustrating to a Taurus woman who would rather just get on with the job at hand. Also, a Taurus woman gets very nervous when things are unsettled, which they will be while he remains undecided.

A Libra man and Taurus woman will usually avoid conflict with one another. This can be a good thing, but it can also be a problem. While there are many little annoyances that can be safely ignored in a relationship, there can also be small issues that can turn into big ones if not addressed. These issues may not cause the end of the relationship, but they can leave both of them feeling unhappy and dissatisfied. While problems could happen over many different issues, there is one main source of conflict these two are almost certain to face.

A Libra man flirts. That is what he does. In many ways, he cannot help it. A Taurus woman does not have any patience for this.  Taurus natives of either gender are known for their possessiveness in a relationship. Part of the reason for this possessiveness is that they need to feel secure. If he is flirting with other women, that will make her feel like their relationship is in danger.

This problem will be exacerbated by the fact that he tends to become more aloof as he gets closer to a partner. This aloofness is because he is feeling comfortable, so he can take off his mask. Even so, combined with his flirtatiousness with other women, however, this can make her feel like he does not really love her.

This is not an easy problem to solve. A Libra man is a charmer, and he really does enjoy talking and flirting with many different people. He is not always even aware of when he is flirting. For her part, it is not easy for her to just accept this about him, because of how insecure this makes her feel. If they truly love each other, they will need to talk about this and work out a compromise of some sort. A compromise should be possible so long as all he is doing is flirting. If he crosses the line into an affair, there will be little hope for compromise or resolution.

Although a Libra man and Taurus woman are very different from each other, they have a shared planetary ruler, Venus, who can bind them together. They do have similar interests, and they can make a pleasant and happy home. The one big problem that they will face is his tendency to flirt with other women, which will trigger her possessiveness and jealousy.