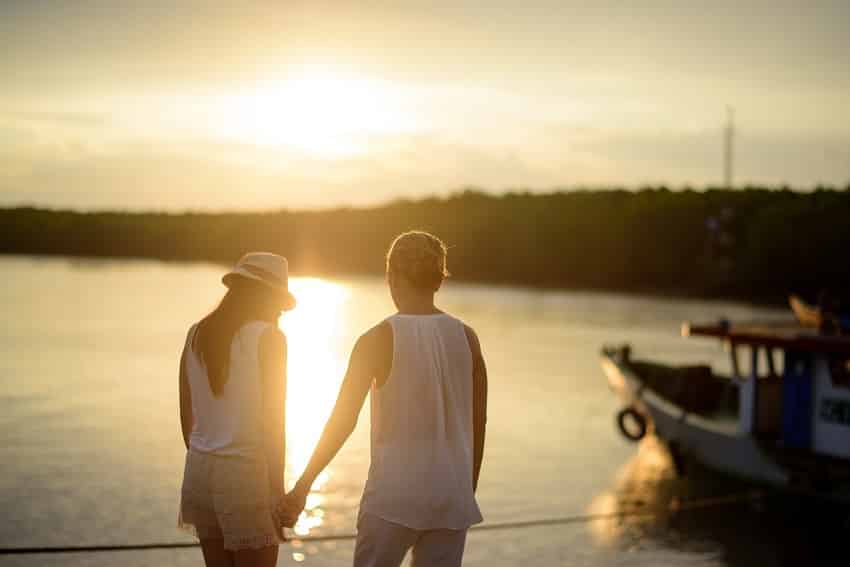 A Libra man and Cancer woman are a mixed combination by zodiac sign. There is a great deal of chemistry between them, but this is also a rather volatile combination. The reason this combination can become volatile is that both of these signs tend to hold back their feelings and communicate indirectly. This can lead to conflict due to pent up anger and frustration.

On the other hand, relationships are very important to both of these signs, so they will be motivated to work on their differences in order to make their relationship successful.

A Libra man is charming and dashing. He has good social skills and is an excellent conversationalist. A natural diplomat, he is able to talk to many different people about a variety of different things. The communication style of a Libra man tends to be a bit more direct than that of a Libra woman, but he still values courtesy more than honesty. For this reason, it can be hard to know what he really thinks.

A Libra man does tend to flirt, particularly when he is feeling relaxed and comfortable. On the other hand, he does value his commitments and he will stay faithful to someone he cares about. Flirting comes so naturally to him, though, that he often does not know that he is doing it, and he can be surprised if his partner responds with anger or jealousy.

For a Cancer woman, her family is everything. To her, there is nothing more important than her relationship and if she has them, her children. She gets her identity from those she cares for rather than her own accomplishments out in the world. Her symbol is the crab, and like the crab, she tends to have a hard shell and a soft interior. Also, like the crab, she tends to go about communication in a rather sideways manner. She has a hard time directly stating what she wants and needs. When she is really upset about something, she tends not to talk at all.

A Cancer woman is at her best when she has someone to look after and care for. Although she usually wants children, she will care for a pet or a houseplant with the same devotion that she would care for a child. If she does not have someone to care for, her negative traits start to surface, and she can become moody and irritable.

There will be a natural attraction between a Libra man and Cancer woman. Libra and Cancer are in an aspect with each other known as a square. Squares create friction between signs, but this friction often manifests as sexual tension. She will be charmed by his polished demeanor, and he will be intrigued by her sweet shyness.

A Libra man is good at talking to many different people, and he will have little trouble drawing a Cancer woman out of her shell. A sign a Libra man likes his Cancer woman is when he activly drives conversations and digs into your past to get to know you well. As they start to get to know each other, they will sometimes find each other annoying, but they will also find that they can not stop thinking about the other.

In many ways, a Libra man and Cancer woman are very different from each other, but they do have some things in common. One of those things is that they both place a high priority on relationships and their family.

The sexual tension between these signs will add heat to the sex life of a Libra man and a Cancer woman. Of the two, he will be the most adventurous in bed, and he will be able to talk her into trying things she ordinarily would not. He tends to be rather intellectual when it comes to sex, but he does want to please his partner. Because of this, he will be able to satisfy her, even though she needs more emotional intimacy than he does.

A marriage between a Libra man and a Cancer woman can be a good one. They will both be highly motivated to work on their relationship, and they both will want to please each other. On the other hand, they will struggle over many things.

Signs that are square each other often have more trouble because of their similarities than their differences, and a Libra man and Cancer woman are no exception. They are both Cardinal Signs, meaning that they like to take control, and they both do so by indirect means. On the other hand, even though they are both indirect, they go about communication in different ways, so they do not pick up on each other’s hints and cues.

The reason that they do not pick up on each other’s hints is that they have very different motivations. For a Libra man, courtesy is everything. His indirect speech is a dance so that everyone can save face if someone needs to reject the other. It is an intellectual exercise.

In contrast, a Cancer woman wants to take care of others, and in doing so, she can become a martyr in the process. Also, Cancer women are often psychic, and they can almost always pick up on the needs and emotions of those they care about without being told. She does not always realize that this is something special to her. Because of this, she tends to think that if someone cares about her, they should be able to intuitively know what she wants and needs. If she has to tell them, it is not the same.

If they want their marriage to thrive, both of them will need to work hard at overcoming their natural tendencies and to communicate directly as much as they can.

Both a Libra man and a Cancer woman will be devoted parents. On the other hand, they may have trouble coordinating their efforts in caring for their children. This is because of the difficulties they have in communicating with each other. The good news is that if they work on this issue for their marriage, it will carry over into their ability to co-parent. It will also help both of them in their relationships with their children.

A Libra man and a Cancer woman will have a difficult time working together. Most Cardinal Sign combinations do. As stated earlier, Cardinal Signs like to be in control, and when two of them get together they often have power struggles. In the case of a Libra man and Cancer woman, these power struggles will be intensified because of their indirect communication styles. Rather than overtly argue, they will snipe at each other with barbs, and if things start really going badly, they may even start to undermine each other.

A Libra man and Cancer woman will do better if they are each in charge of separate areas. On the other hand, they may struggle to decide what areas they are each to control. Or rather, they will both tend to offer each other the thing that they themselves want to do, and if the other takes them at their word, there could be resentment. Just as in every other area of their life together, they will both need to commit to saying what they mean and meaning what they say.

The communication problems between a Libra man and Cancer woman will cause trouble until they learn to talk to each other directly. On the other hand, if they decide they want to be together, they will work through this issue.

A more dangerous problem that they may have will arise out of his tendency to flirt. This will make her feel unloved and uncared for, and it will tend to drive her back into her shell. Once a Cancer woman goes into her shell, it is hard to get her to come out again. Also, while she is in her shell, her claws make very sharp weapons. As sweet as Cancer women usually are, they can turn cruel when they are upset.

The way through this is for him to reassure her that he loves her. It will have to be by showing her rather than telling her. He needs to be more charming with her than he is with anyone else to do this. For her part, she will need to speak up about what is bothering her and to come out of her shell to deal with the problem directly.

There will be many struggles between a Libra man and Cancer woman. Yet, they will also have a strong physical attraction and a deep commitment to each other. The key to a successful relationship between them is for them to work towards overcoming their natural tendencies in order to do their best to communicate directly. If they do, they will be able to solve any problem that comes up and have a happy and stable long-term relationship.

Article Name
Libra Man and Cancer Woman Compatibility: Love, Sex, and Chemistry
Description
There will be many struggles between a Libra man and Cancer woman. Yet, they will also have a strong physical attraction and a deep commitment to each other.
Author
Cynthia Thinnes
Publisher Name
Numerology Sign
Publisher Logo