Cancer is a complicated sign. Cancer natives can be the most tender and loving partners in the zodiac. On the other hand, they can also be irritable and standoffish.

In terms of compatibility, Cancer needs a partner who can provide stability and bond on a profound level.

Although we’ll discuss Cancer compatibility, there is much more to a person’s character and relationship style than just their Sun Sign. Most people are made up of several zodiac signs, and for full compatibility analysis, it is recommended that you consult a professional astrologer.

Below is a chart showing the compatibility between cancer and the other zodiac signs in terms of sex, love and marriage, communication, and the overall Cancer compatibility. Other factors include how each sign behaves in relationships and professional observation and experience as to how the various signs interact with each other. 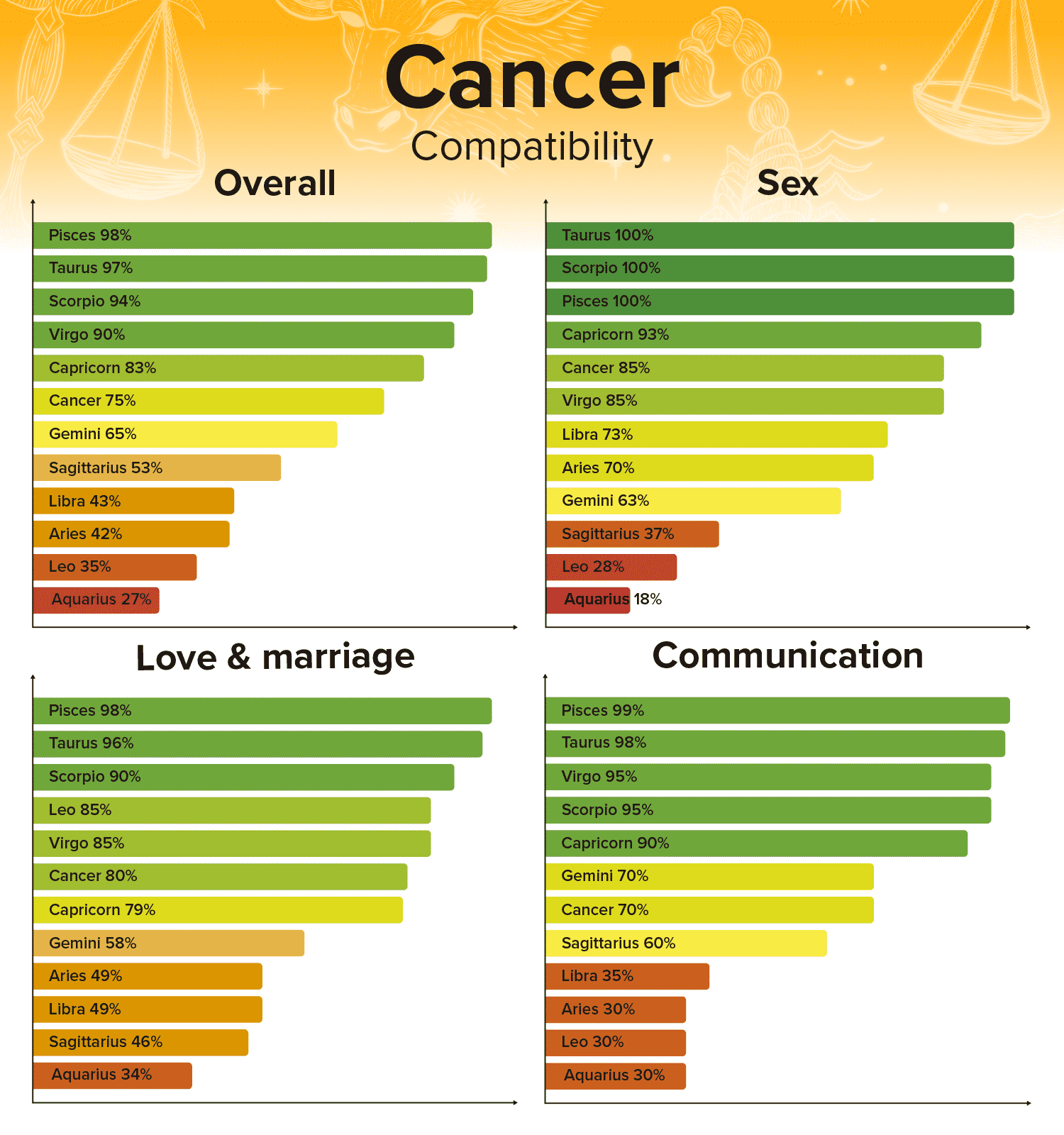 Below is a list of the best Cancer matches and why they are the most compatible with Cancer. These signs understand Cancer and can provide stability and balance.

Pisces is considered the best match for Cancer. As Water Signs, Cancer and Pisces have the capacity to bond on an intense level. These signs also have an intuitive understanding of each other, and they can communicate without saying a word. They instinctively know how to comfort each other and give each other the security they need.

Yet, it is not just the similarities between these signs that make them such a good match. Their differences complement and balance each other in significant ways. Cancer is domestic and practical, and a natural caregiver. The downside of these traits is that Cancer tends to get very nervous and is subject to worry.

Pisces is gentle and spiritual. This sign is capable of great compassion and a deep understanding of other people. Yet, Pisces is often detached from the material world and can have trouble with practical skills.

Cancer can help Pisces with practical matters, and Pisces can soothe Cancer and provide the emotional support that this sign needs. Because of these, these signs can bring out the best in each other.

On the outside, Taurus and Cancer can seem quite similar. These signs are both extremely domestic, loving good food and comfortable home. They also both prefer to spend their time at home to going out. Taurus and Cancer share a lot of skills and interests, and they usually find that they have a lot in common early on in their relationship.

Yet, Taurus and Cancer have some important differences which complement each other, making them a great compatibility match. The main difference is that Cancer is a Water Sign, and Taurus is an Earth Sign. The emotions rule cancer, and physical and material considerations rule Taurus.

The other main difference is that Cancer is a Cardinal Sign and Taurus is a Fixed Sign. Taurus dislikes change and is prone to laziness. Cancer is an active sign that likes to take charge and get things one.

These differences help these signs to balance each other. Taurus can remain sensible when Cancer frets and worries, and Cancer can motivate and encourage Taurus to get things done.

For many sign combinations, the genders’ differences create slight variations concerning compatibility, depending on which sign is the man and which sign is the woman. However, when it comes to Scorpio and Cancer, there is a big difference in the compatibility between Cancer Man/Scorpio Woman relationship and one between a Scorpio Man and a Cancer Woman.

In the case of Cancer and Scorpio, the reasons for this difference come from societal expectations concerning gender roles rather than from any natural difference between men and women.

A Scorpio Man and Cancer Woman are a good match and for a pleasant and harmonious relationship. In this relationship, the Scorpio man will generally take on the dominant role, and the Cancer woman will help to care for him and their family. This will be a very traditional relationship.

In theory, the same would be true for a Cancer Man and a Scorpio Woman, except for a reversal of roles. Yet, this may be a struggle for this pair, especially if they do not have family or social support for such a role reversal. These signs tend to be conservative and worry about what others think of them. Yet, if they can navigate this challenge, they make a great pair.

According to the percentages listed above, Virgo has higher compatibility with Cancer than Capricorn. Yet, Cancer and Capricorn are each other’s opposites. In theory, opposites are the natural partners for each other.

This means a big difference in the compatibility between a Cancer Man/Capricorn Woman relationship and one between a Capricorn Man and Cancer Woman.

Now that we have seen the best matches for Cancer let us look at the least compatible cancer signs.

The Aquarius sign is commonly considered the worst match for Cancer. Cancer compatibility is governed by intuition and emotions. Aquarius is governed by logic and reason. These signs have absolutely no understanding of each other, making it hard for them to work through their differences.

Aquarius is rarely moved by another person, even under the best of circumstances, and a Cancer’s appeal will never move this sign to emotions and feelings. In turn, Cancer will find the Aquarian approach too cold and unfeeling. This means that most discussions and negotiations are doomed before they begin.

In actuality, however, this combination is quite rare. These two have so little connection that most of the time, they do not get together at all.

Leo is much more tolerant, and understanding of emotions than Aquarius is, but Leo needs a lot of social interaction. Leo enjoys being the center of attention and loves to put on a show. Cancer is very shy in public and prefers to remain as private as possible.

This is another match that is markedly different depending on the gender of the natives. When the man is a Leo, and the woman is a Cancer, he can express his Leo nature by protecting and shielding her.

On the other hand, a Leo woman will have a hard time respecting a Cancer man unless she can see his unique strength and courage.

Aries and Cancer do have things in common and have great sexual compatibility. However, they have the potential to be the most volatile combination in the zodiac.

Due to this, Aries and Cancer handle conflict differently and often argue, making them one of the worst matches. When there is a problem, Aries tackles it head-on. This sign has a straightforward approach and sees difficulties as challenges to be overcome.

Cancer takes a sideways approach. The natural inclination of this sign is towards protection. While Cancer can be fearless in protecting another, when natives of this sign feel personally attacked, they tend to retreat into their shell. Yet, they are not helpless inside their shell; like their symbol, the crab, they can have vicious claws.

Aries, the ram, will charge at Cancer, the crab, which will drive Cancer into their shell and attack with their claws. This will enrage Aries, causing Aries to attack more fiercely, driving Cancer deeper into their shell. This could become a vicious circle.

Cancer men look for a deep connection, which makes the fellow water signs Pisces and Scorpio the best Cancer man matches. Cancer men are also very compatible with down to earth Taurus. He finds these signs understand his emotions, and they can quickly form a meaningful relationship, sharing everything.

Cancer men make an excellent marriage and long-term relationship matches with these three signs, as they tend to feel like they are best friends as well as lovers. Cancer men are most sexually compatible with Pisces, Scorpio, and Taurus due to the meaningful connections each sign enjoys.

Cancer men tend to be great communicators and will never get bored sharing their thoughts with Virgo and Capricorn.

Cancer women are most compatible with deeply emotional signs, so they make excellent matches with the other water signs Pisces and Scorpio.

She is also highly compatible with the earth signs Taurus and Virgo, who are deeply emotional but can provide her with a structure and stability level.

When it comes to long-term love, Cancer women want someone with whom they can share everything, which means that Pisces, Taurus, and Scorpio are her best matches.

These signs all work well in the bedroom as well, as they are all generous lovers eager to please and satisfy one another.

Cancer women will probably find that most of her best friends also come from the water and earth signs. They have an innate understanding of one another, which allows them to bond quickly and deeply.

Capricorn is the natural partner to Cancer. However, when the man is a Cancer native, they will have to negotiate societal gender expectations with their natural talents and inclinations as they are working through the division of labor in the relationship.

Cancer has little in common with either Aquarius or Leo, and Cancer and Aries can be the most volatile combination in the zodiac.

That being said, there is much more to the success of a relationship than natural zodiac compatibility. In particular, the motivation and willingness to work through differences will make or break any relationship, regardless of the level of compatibility Cancer has between the signs. 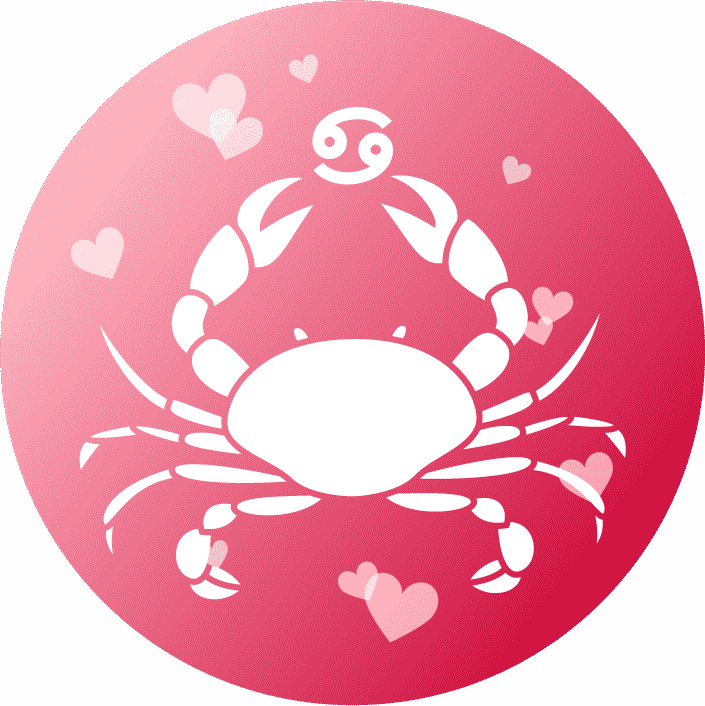