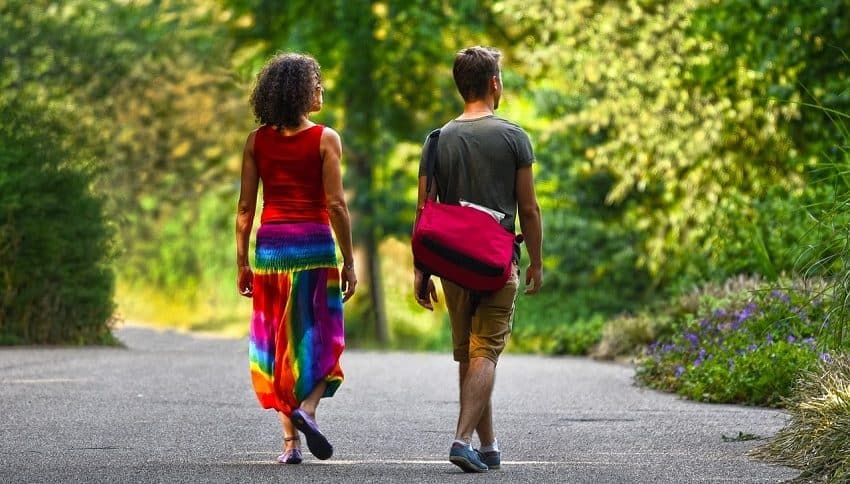 With an Aries man and Sagittarius woman, we have one of the liveliest combinations in the zodiac. They will have a whirlwind romance and lifestyle that would leave most other signs completely exhausted. Sagittarius is one of the few zodiac signs that can match the sense of adventure and love of challenge of an Aries man.

An Aries man and Sagittarius woman are highly compatible, and the two of them will have a lot of fun together.

An Aries man loves challenge and excitement. He has a high energy level, and he likes nothing more than to test his abilities and his courage. He is blunt and open about his thoughts and feelings.

Ruled by Mars, he is the archetypal warrior and soldier. Despite this, he is able to enjoy himself. He works hard and he plays hard.

He does like to take charge in a relationship, and at times, he can sound like a chauvinist. Even so, he likes a woman who can stand up to him, and despite what he says, he is attracted to strength. There is nothing that excites him more than a woman who can give as good as she gets.

A Sagittarius woman is a law unto herself. Sagittarius is a fire sign, but she is not as combative as an Aries woman, nor does she have the pride of Leo woman.

In a Sagittarius, fire takes on a playful, flickering quality. The most important thing to her is freedom. She may or may not have a “tomboy” demeanor. On the other hand, she is likely to be involved in some sport. If they were wise, her parents enrolled her in sports as a child just to work off all of her excess energy.

There is a flightiness to Sagittarius. This is because they usually cannot be bothered with boring things like organizers or calendars. For this reason, a Sagittarius woman will sometimes forget to show up for a date that has been scheduled, even if she is highly attracted to a man.

Although she often says rather rude and blunt things, people rarely get angry with her for them. This is because her buoyant and cheerful disposition is devastatingly charming.

There will be instant chemistry between an Aries man and Sagittarius woman. She will love his “bad boy” demeanor and find it incredibly sexy. He, in turn, will find her bold and brash manner irresistible. To the outside world, it will look like they are arguing rather than flirting, but the chemistry between them will be intense.

The only real problem will be if she stands him up, or even if she is just late for their date. An Aries man will take offense if he is kept waiting, and he will not be as easily lulled by her charm as some men. She, in turn, will not want to be told what to do, even if all she is being told to do is to exercise common courtesy.

An Aries man and Sagittarius woman will have a hot and passionate sex life. Both of them enjoy trying new things, and they both like to be a little rough in the bedroom. Neither of them is highly sensitive, so they will be focused on having fun and enjoying intense sensation rather than creating an emotional bond.

Also, read our guide on seducing an Aries man to help you get the most of him.

While an Aries man and Sagittarius woman are highly compatible, marriage may be a bit of a challenge. This is because Sagittarius natives of either gender tend to be shy of commitment.

In some ways, Sagittarius women find it easier to commit than Sagittarius men, but in others, they find it more challenging.

For this reason, it is very likely that an Aries man and Sagittarius woman will live together for some time before getting married if they do formally marry at all.

On the other hand, they do make very good lifelong partners. An Aries man will be one of the few men who are interesting enough to hold her attention.

For a Sagittarius woman to settle down with someone, he needs to prove to her that life will be more of an adventure with him than without him, and an Aries man will easily be able to do that.

They may not decide to have children. A Sagittarius woman, in particular, will be reluctant to be tied down with children. If they do have children, how they will do as parents will depend on the type of children they have.

If they have fire or even air children, they will be just fine. They will provide many interesting experiences for these children which will help them to thrive. If they have earth or water children, however, they may not give these children the security and emotional support that they need.

The one difficulty they will have is that she will not have the same work ethic that he will. She will want to take time to play and have fun, and he will get annoyed with that. He may be persuaded to take a break, however, which will be good for him as well.

An Aries man and Sagittarius woman will fight. Most of the time, though, their fights will not be serious. They will usually be playful and teasing. There are a couple of ways that their arguments could turn serious, however. Below are the two main problem areas in an Aries man, Sagittarius woman relationship.

Even though Aries men like strong women, they still like to take charge and be in control. A Sagittarius woman does not like to be controlled. The situation could get particularly volatile if he becomes possessive or jealous.

Luckily, the jealousy of an Aries man is not based on emotion, like a Scorpio man, or insecurity, like a Taurus man. His is based on pride instead. The reason that this is lucky is that she will have a better understanding of pride than of emotion or insecurity.

An even more serious difficulty for them is her flightiness. Sagittarius has many virtues, but reliability is not one of them. As mentioned before, this will be a problem when they are dating. It will remain a problem for their entire life together if they settle into a marriage or a lifetime commitment of some sort.

For all of his faults, an Aries man is a man of his word. If he says he will do something, he will do it. This is a point of honor for him, and he expects the same of others. It will annoy him greatly if she does not follow through with something that she had promised. This will prompt him to want to take control. She will respond to his attempts at control by becoming even less reliable out of spite. This could become a vicious circle.

There is not a simple solution to this. Even if she wanted to, she will never be very consistent. It really is not in her nature. If he loves her, this is something he will have to accept about her, even if it drives him crazy. The best thing for them to do would be to find humor in the situation.

An Aries man and Sagittarius woman make a high energy and passionate couple. Even though there are some minor difficulties they will have to overcome, they have a lot in common. They can have a happy and exciting life together.