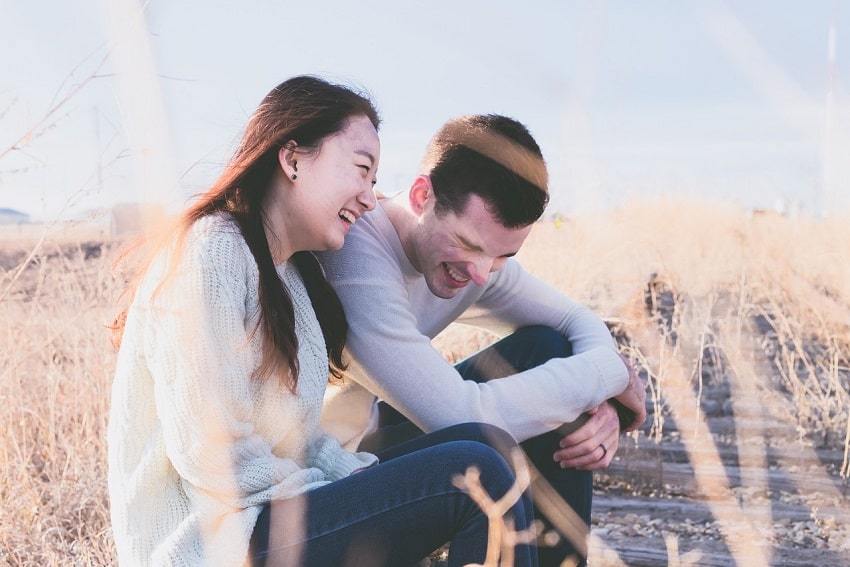 It is unlikely that an Aries man and Capricorn woman will enter into a romantic relationship at all.

The compatibility between Aries and Capricorn is known as a square, and this is an aspect of tension. This means that these two signs tend to annoy each other. While squares can produce sexual chemistry, in the case of an Aries man and Capricorn woman, it will be very hard for these two to warm to each other enough to get that far.

On the other hand, if they do end up as a couple, an Aries man and Capricorn woman will have the drive and determination to meet and overcome any challenge before them. They have the potential for a happy and long-lasting marriage.

Here are the strongest points of compatibility between an Aries man and Capricorn woman.

One prominent Aries trait is their “bad boy” exterior. He works hard, but he also likes to play hard. He is an archetypal warrior, but he tends towards being the common soldier. An Aries man lives in the moment, and he does not have a lot of interest in planning for the future. While he has a lot of courage, he does not have much in the way of patience.

No matter what he says or how he acts, he really is not interested in a meek or submissive partner. On the other hand, he has a lot of pride, and he does want to at least think he is in charge in a relationship.

Capricorns of either gender are social climbers. Capricorn women are ambitious and tend to rise high in their chosen profession. Often they have had to break gender barriers to get to where they are, particularly if they are a little older. They are serious, and they do not put up with any nonsense.

A Capricorn woman is very careful in her choice of partner. She will almost never allow herself to get swept off of her feet, and she will carefully assess the prospects of any man she considers entering into a relationship with.

It is not that she wants to marry for money. She is usually quite capable of providing for herself. On the other hand, she does not want a man that she feels will drag her down.

If an Aries man and Capricorn woman meet at a social gathering, they will very likely have nothing to do with each other. The dynamics between them will be very similar to the dynamics between an Aries man and a Scorpio woman. Like a Scorpio woman, a Capricorn woman will not be impressed by his behavior, and so she will make herself unapproachable.

If an Aries man and Capricorn woman meet at work, she is likely to be his superior. Even if they are at a workplace that does not forbid fraternizing, he generally will not want to date a woman in a higher position than him. An Aries man has a lot of pride, and that would probably be too much for him.

If he is her superior or if they are equals at work, there is a better chance of them becoming attracted to each other. On the other hand, a Capricorn woman is very serious about her work and is extremely business-like, so a workplace romance is still rather unlikely.

The most likely way that an Aries man and Capricorn woman would come together as a couple is if they grew up together. They will have a natural chemistry between them.

It is just that there are so many barriers at the beginning that they will rarely discover this chemistry. If they have known each other since they were young, however, they will have already gotten past these barriers.

If you’re unsure on his feelings towards you, read our guide on the signs an Aries man loves you.

Surprisingly enough, if the relationship between an Aries man and Capricorn woman does get to the point where they have sex, it will be enjoyable for both of them.

Despite her cold exterior, as an earth sign, a Capricorn woman is quite sensual. She very much enjoys pleasures of the flesh. She will appreciate the passion and energy of an Aries man.

Also, as mentioned before, the friction a square produces often creates a sexual tension. This will add the heat of their intimate encounters.

Even though the likelihood of an Aries man and a Capricorn woman becoming attracted to each other and falling in love is low, if they do end up getting together and marrying, their marriage will be a good one.

Yes, they can and do annoy each other at times. However, most of the things that bother them about the other are things that are on the surface, such as his bad manners and her apparent coldness. When they marry, however, an Aries man will become more civilized and a Capricorn woman will become warmer.

A strong Capricorn trait is how they take their marriage and relationships seriously. She will not let petty arguments and bickering get in the way of what needs to be done to make a marriage work. She will take control of their married life, and he will fall in line with her plan.

As we mention in our guide on how to seduce an Aries man, although he likes to control, he will listen to an authoritative figure. A Capricorn woman has an air of authority and gravitas to her, even in the privacy of her home. Because of this, an Aries man will not even try the rude and obnoxious things that he may do or say with some other women.

They will generally make good parents if rather demanding ones. She will be the stricter of the two. While they may go overboard with discipline, a Capricorn woman will listen to the advice of the children’s teachers and other experts.

A Capricorn woman will want to do things “right” as a parent, so if those she deems to be experts tell her that she should lighten up a little, she will.

An Aries man and Capricorn woman will generally work well together. They are both cardinal signs, which means that they both want to lead and take the initiative.

On the other hand, Capricorn is also ruled by Saturn and cold by temperament, which slows her down quite a bit and gives her staying power. A Capricorn woman is able to see the big picture and the long-term strategy.

It will be clear to the Aries man that she has abilities that he does not. An Aries man is great in a crisis, but he really does not have the patience or inclination for planning or strategy. An Aries man is a warrior by nature; a Capricorn woman is a general.

On the other hand, because an Aries man is who he is, there will be times that his pride will get the better of him. He will occasionally become grumpy and challenge her. This will baffle and annoy the Capricorn woman.

She sees work as a series of tasks that need to get done. She does not have the time or the energy for distractions such as ego or pride. Because of this, she will see his fits of temper as unnecessarily disruptive, and if they are bad enough, she will ignore him and get the job done herself.

Fights between an Aries man and Capricorn woman will be few and far between despite the tense relationship between these signs.

The reason for this is that a Capricorn woman will rarely engage in arguments. She sees them as a waste of time. When the Aries man gets grumpy and tries to provoke a fight, she will either ignore it or give him a look and go about her business.

This is one of the main reasons that it is so hard for an Aries man and Capricorn woman to last long enough to form a long-term relationship in spite of the chemistry between them. A Capricorn woman will simply not engage with him if he does what comes naturally to an Aries man.

On the other hand, if they have been together long enough, they will come to an understanding. They will develop a routine and learn to accommodate each other.

The relationship between an Aries man and a Capricorn woman will be all or nothing. There are many compatibility barriers to a romantic relationship forming between these two. For this reason, most of the time any potential relationship will dissolve before it even starts.

On the other hand, there is strong chemistry between these two. Should they interact long enough to discover this chemistry, they have the potential to marry and stay together for life. If they do get married, they will have already have worked out all of the problems between them.