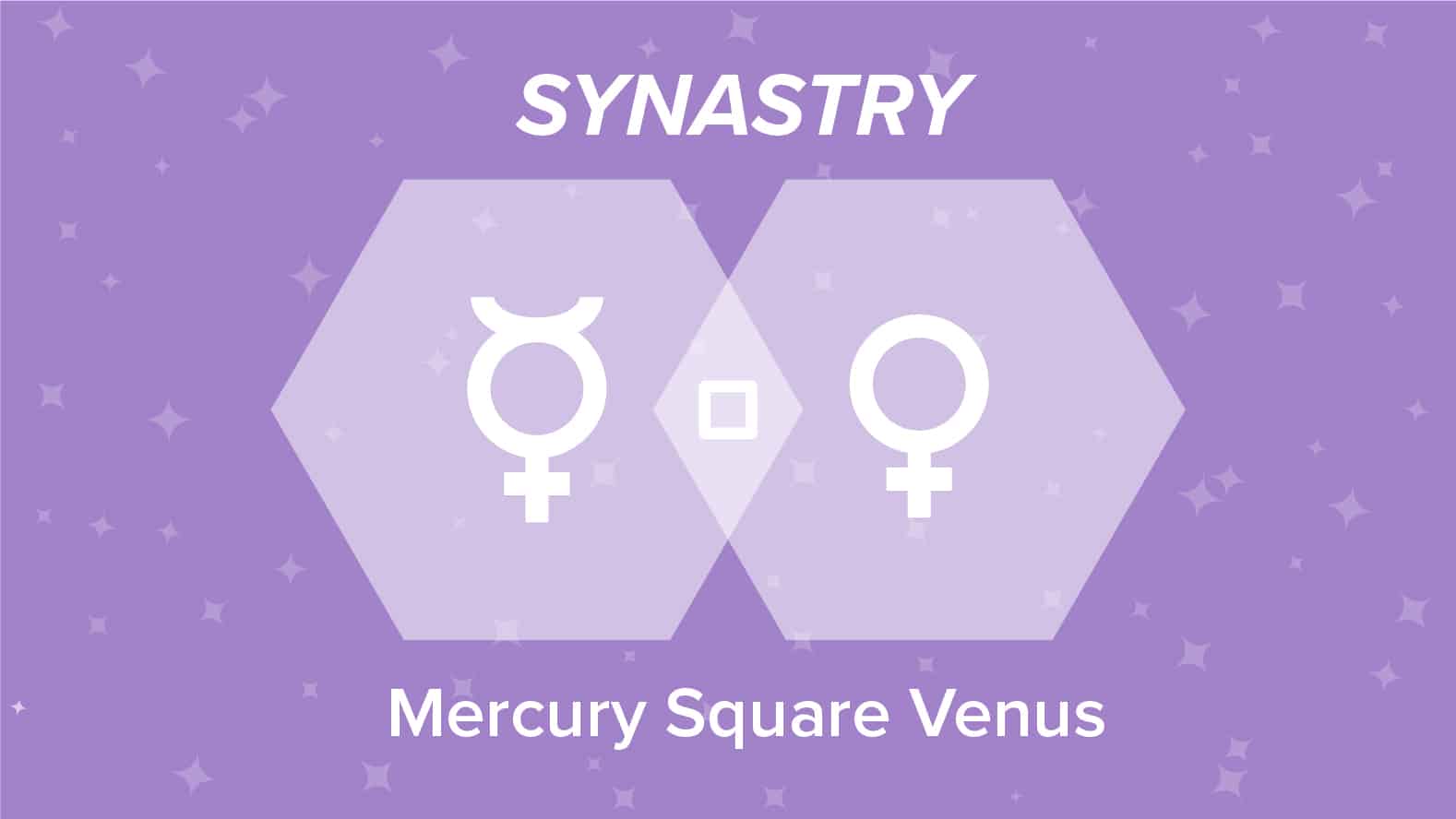 Mercury square Venus has positive and negative effects in synastry. Venus is the main significator for relationships, and Mercury governs communication.

A square is considered a difficult aspect. On the other hand, both Mercury and Venus are positive planets.

The positives and negatives tend to offset each other. Because of this, this aspect is usually a mild influence in synastry.

On the other hand, there are sign combinations that will tip the scale. These combinations will make this aspect either more positive or more negative than usual.

In synastry, Mercury square Venus will stimulate conversation. It will also tend to create minor disagreements.

Squares are tense aspects that can create conflict. On the other hand, the planets involved in this square are naturally agreeable.

Mercury is a changeable planet that is easily swayed, and Venus generally tries to avoid conflict.

The dual nature of this aspect makes it a mild influence. In most cases, it will be overshadowed by other synastry aspects between the two charts.

Even so, certain sign combinations will make this aspect stand out more than it ordinarily would.

Mercury in Gemini and Venus in Virgo

When Mercury square Venus is between these signs, it becomes much more positive than it would ordinarily be.

Virgo has the reputation for perfectionism and fault-finding, which can be hard on relationships. Venus is debilitated in this sign.

Mercury has the ability to absorb Venus’ critical nature and to transmute it into an opportunity for productive communication.

This ability makes this aspect an excellent combination when it occurs in these signs.

Mercury in Gemini and Venus in Pisces

In this case, both of these planets are strong. Mercury rules Gemini, and Venus is exalted in Pisces.

While this is good for each of the individuals separately, it can make the synastry aspect more difficult.

This is especially the case because Pisces is quite hostile to Mercury. This will cause them to fight more.

Mercury in Sagittarius and Venus in Pisces

This combination can also be rather tough.

Venus is strong in Pisces, but Mercury is weak in Sagittarius.

Venus does not have any special dignities in Sagittarius which would enable it to compensate for Mercury’s difficulties.

To make matters worse, Pisces is hostile to Mercury.

This aspect tends to manifest by Mercury not being able to express love and affection, which will upset Venus.

Venus in Pisces is extremely forgiving, though, and will generally not complain about it.

Even so, Venus will tend to suffer in silence, which will exacerbate other difficult aspects the two have between them.

Mercury in Sagittarius and Venus in Virgo

This is the worst combination for this aspect, and it has the potential to be a major source of difficulty between the two.

In this case, both of the planets are weakened.

Mercury does rule Virgo, but it is too weak to be helpful to Venus. Venus does not have any dignities in Sagittarius.

Venus will be critical of Mercury, who will respond by becoming more distant. Mercury will feel controlled by Venus, but will not express this directly.

With this combination, it will be important to see if the two have other aspects that can help the situation.

In addition to the special sign combinations, this aspect is also modified by the houses Mercury and Venus fall in each other’s charts.

In the case of a man’s Mercury square a woman’s Venus, the man will enjoy flirting with the woman, especially during the early stages of the relationship.

He will try to seduce her verbally. She will seem to resist his efforts, at least at first.

She will feel slight annoyance with him, but she will also find him fascinating.

If this flirtation leads to a deeper relationship, this aspect will generally be overshadowed by other synastry aspects in the chart.

The major exception is if his Mercury is in Sagittarius and her Venus is in Virgo or Pisces. In these cases, the difficulties described above will be even more pronounced.

In general, when it is a woman’s Mercury that is square a man’s Venus, the relationship will be more balanced than when the situation is reversed.

This aspect creates a mild role reversal when it comes to traditional gender roles. This role reversal will ameliorate the difficult sign combinations that are listed above.

She will be the driving force when it comes to communication between the two.

He may seem to be annoyed by her intelligence, and they both may attribute this to his attitudes about women.

Even if his general attitude towards women does play a role, his specific feelings towards her will be primarily based on the relationship between her Mercury and his Venus.

In friendship synastry, Mercury square Venus is a minor consideration, even in the special sign combinations discussed above.

On the positive side, they will enjoy talking with one another.

On the negative side, they will disagree with each other on many points.

This aspect, in and of itself, will not make or break the friendship, though. In most cases, other synastry aspects will take priority.

How to Tell if Mercury is Square Venus in Synastry

The first step in identifying Mercury square Venus between charts is to look to the signs that each of the planets is in.

Below is an image showing the signs that are square each other: 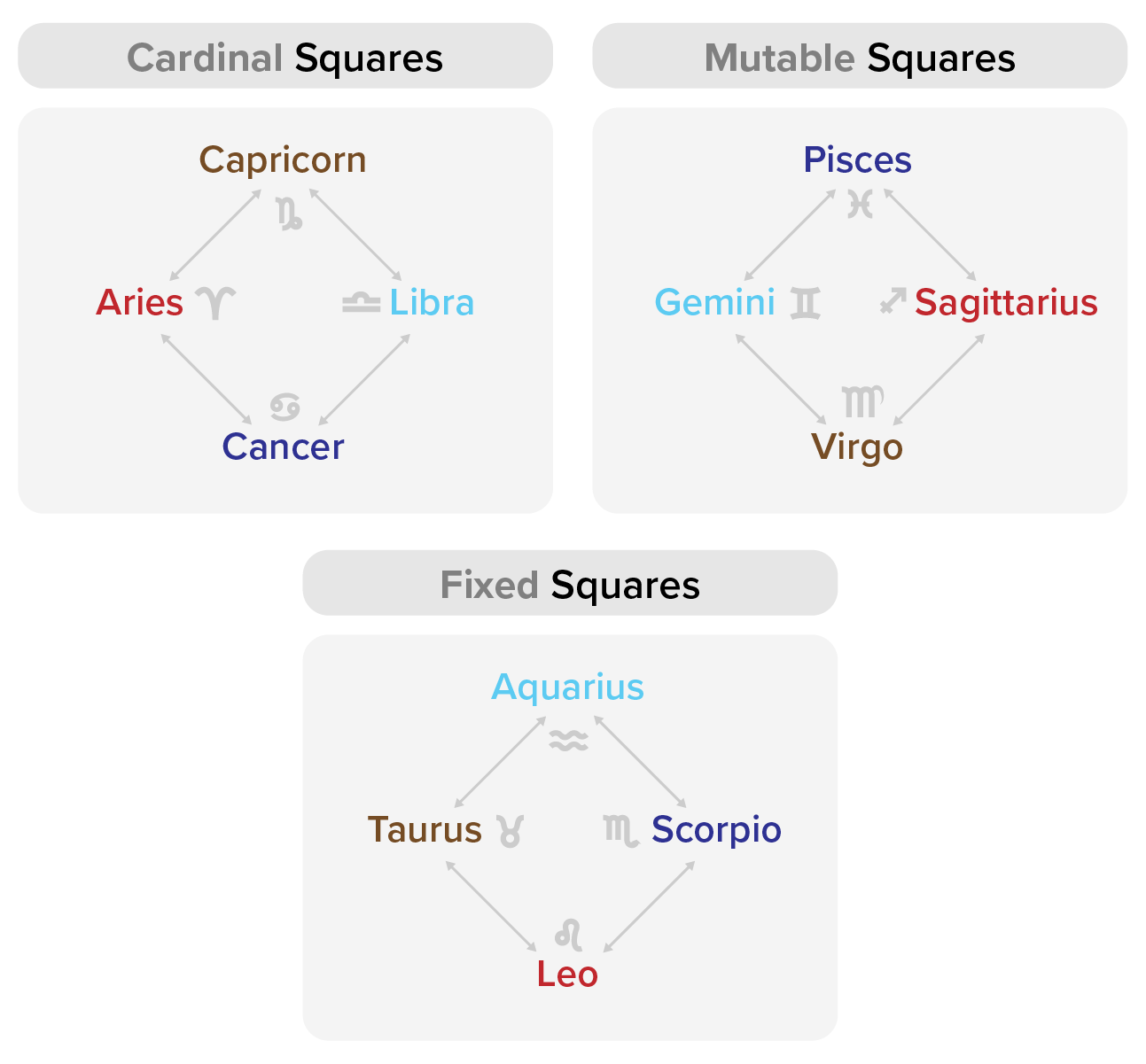 Squares are grouped by Mode. In the case of Mercury square Venus, all of the special combinations listed above are between the Mutable Signs.

If there is an aspect by sign, it will have at least some influence, particularly in the special combinations.

The aspect will be stronger the closer it is by degree. If the aspect is within 7 degrees, it is at full strength.

Planets can be within 7 degrees of the exact aspect without being in the correct signs.

This is known as a cross-sign aspect, and it is very weak. In the case of Mercury square Venus, it is probably too weak to be a serious consideration.

Even though Mercury and Venus are both important planets in synastry, a square between them is generally quite mild.

On the other hand, there are special sign placements that can make this aspect more positive or more negative, especially in romantic relationships.