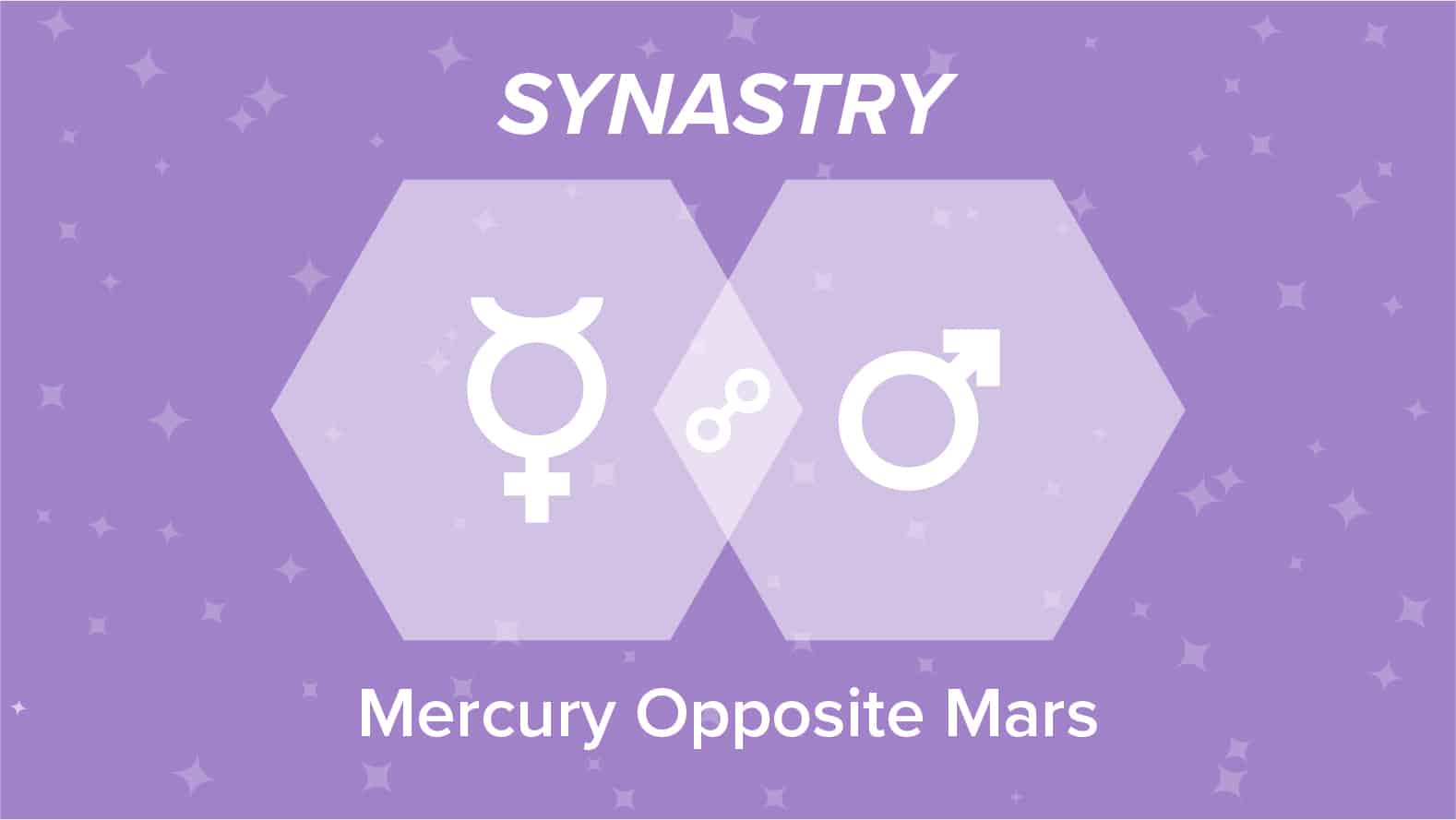 Mercury opposite Mars is a complicated aspect in synastry. On its surface, it is difficult, but if two people have humility and maturity, they can use this aspect to be excellent advisors to each other.

Mercury governs communication, which makes it a very important planet when it comes to relationships. It also governs rationality and wisdom.

Mars governs how we assert ourselves and can represent conflict in relationships. It is also the planet that helps us get things done.

An opposition is considered the most difficult aspect, but in relationships, it can represent balance.

Mercury Opposite Mars in Synastry

On a basic level, Mercury opposite Mars represents the need to balance thought with action. In synastry, one person will be the brains and the other will be the brawn in the relationship.

This is a simplistic statement, and the reality will almost always be much more complex. This will almost certainly not be the only aspect between their charts, and the other aspects will modify this reading.

Even so, at least on some level, one person will want to think and plan and the other will want to start doing things.

If the two can listen to each other and work together, this aspect can be an asset to both of them. If they cannot, this could lead to constant bickering.

To make the most of this aspect, both people need to respect each other and their differences.

This will be harder for the person whose Mars is involved because they will want “less talk and more action.” It will be important to look to that person’s Mercury to see if there are opportunities for true communication in the relationship.

The meaning of this aspect will also be colored by the house positions of Mercury and Mars in each other’s charts.

Mercury opposite Mars is not an aspect that will generate romantic feelings between people. The love relationship will usually come from other aspects between them.

Indeed, the couple may not even really notice this aspect during the earlier stages of their relationship.

If they move towards a longer-term commitment, such as getting married or living together, however, this aspect will become quite pronounced. How they handle it is likely to make or break their relationship.

In some ways, when it is the man’s Mercury opposite a woman’s Mars, there will be a slight role reversal in terms of gender. She will tend to take the initiative in any project they take on together.

The problem is that he can seem like he is criticizing her plans, and his input may even be construed as “mansplaining.”

Whether or not anything like that is a factor in their disagreements, he will genuinely see things differently than she does.

This could make it impossible to accomplish anything together if they cannot learn to respect each other. If they can though, they will make an excellent and balanced team.

In the case of a woman’s Mercury opposite a man’s Mars, the gender roles will be more traditional.

She will be the driving force when it comes to communication. He will tend to resist her, however, and want to get on with whatever they have to do without talking about it.

There is a real risk that he will ignore her much of the time. If he does, this will be a big mistake.

He will run the risk that she will stop trying to communicate with him.

This will, of course, be detrimental to the relationship. It will also deprive him of her perspective and valuable insights that she will bring to the table.

She will be able to balance him in ways that someone who agreed with him more cannot.

Mercury Opposite Mars in Friendship

Mercury opposite Mars will rarely produce a close friendship. Most people look for friends that are similar to them rather than different.

Yet, for those rare few who are willing to undertake such a friendship, they will make an amazing team.

If you are looking for someone to advise you on your choices in life, you can do no better than someone whose Mercury is opposite your Mars.

They will see your intended actions with a clear head and will help you to really think about any decision that you make.

How to Tell if Mercury is Opposite Mars in Synastry If Mercury and Mars are in signs that are opposite pairs, the polarity of this aspect will be present, at least to a certain degree.

The aspect will be at full strength if the planets are within seven degrees of an exact aspect, which is the orb between these planets. The closer they are, the more powerful the opposition will be.

Mercury and Mars can be within orb of this aspect even if they are not in signs that are opposite pairs. This can happen if one planet is at the end of a sign and the other is at the beginning.

In the case of a cross-sign opposition between Mercury and Mars, the two will have difficulty understanding each other. This will make the disagreements and miscommunication between them more pronounced.

Mercury opposite Mars is a difficult aspect, but it can be extremely productive if the people are willing and able to listen to each other.

To get the most out of this aspect, both people need to be open to hearing what they do not want to.

If they can do this, they can be an excellent team and can give each other useful advice. They will balance each other and accomplish quite a bit together.

Article Name
Mercury Opposite Mars Synastry: Relationships and Friendships Explained
Description
Mercury opposite Mars is a difficult aspect, but it can be extremely productive if the people are willing and able to listen to each other.
Author
Cynthia Thinnes
Publisher Name
Numerology Sign
Publisher Logo