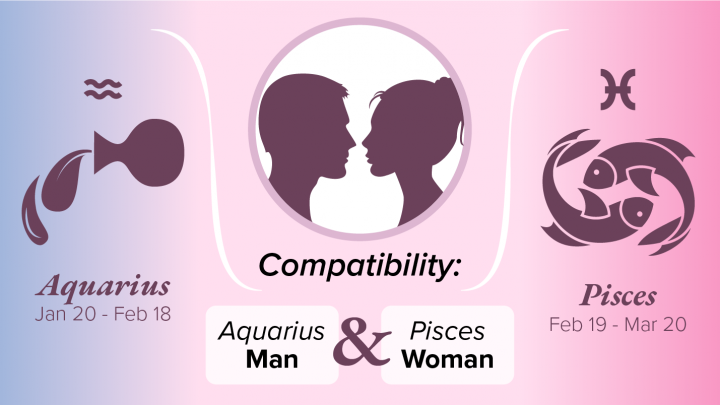 An Aquarius man and a Pisces woman are a rather mismatched pair by zodiac sign. Like most adjacent signs, they do not have much in common.

While an Aquarius man might not give a Pisces woman the emotional support that she needs, he is stable, which will give her an anchor. He will also be accepting of her otherworldly nature.

Although an Aquarius man enjoys being with other people, there is often a remote quality to him. He does not tend to initiate contact. Instead, he waits for others to come to him. He can seem open-minded because he listens to the ideas of others with interest, but it is rare that he ever changes his own mind about anything.

An Aquarius man is often depicted as progressive and filled with revolutionary ideas, but in reality, he is just as likely to be conservative or even reactionary. It is hard to predict what an Aquarius man might think.

An Aquarius man is as unpredictable in his choice of partners as he is in every other aspect of his life. His natural partner is someone who is larger than life, confident, and a bit showy.

On the other hand, he is attracted to a variety of different people. The most important thing to him is intellectual stimulation. He will never be interested in someone who is dull or boring to him.

A Pisces woman has an otherworldly quality to her. She is often out of place in the so-called “real world.” Of all signs, Pisces is the least bound by the material world.

In Western astrology, the most common zodiac that is used is the Tropical Zodiac, which is based on the seasons rather than the constellations. Aries the sign at the Spring Equinox in the Northern Hemisphere, which is a time of rebirth and renewal.

For this to happen, the old most completely fall away. This is the task of Pisces. In the modern world, which is very material, a Pisces woman often finds herself lost and a bit confused. This can make her seem rather flaky, and many people underestimate her.

As difficult as the material world is for a Pisces woman, she is very much at home in the spiritual one. Even if she does not belong to an organized religious community, she is usually very connected to her Higher Power and has a deep spiritual life. She is often quite brilliant when it comes to topics such as metaphysics or theology.

A Pisces woman is at her best if she has someone who can give her grounding, but who will also give her room to explore her true nature. She is a devoted and loving partner, and she can adapt to many different people.

Also, the sweet feminine demeanor of a Pisces woman and her tendency to be flighty about practical matters can mask her intelligence. Many men find this softer femininity attractive, but it does not impress an Aquarius man. He is attracted to intelligence above all else, and he may not see hers at first.

If they do end up talking, however, he will learn that there is a lot more to her than meets the eye. A Pisces woman is usually humble and self-effacing, but as she talks, it will be clear that she knows quite a bit.

An Aquarius man may still not appreciate her, as he tends to favor the rational over the psychic or the spiritual. On the other hand, he could find himself attracted to her because she is interesting. He often enjoys being with people he disagrees with, especially if they have views and opinions that he has never heard before.

Sex may be a challenge for an Aquarius man and a Pisces woman. An Aquarius man tends to be a bit detached and aloof, even in the bedroom. He views everything in life from an intellectual perspective, even sex.

A Pisces woman wants to bond with a partner body, mind, and soul and seeks a psychic connection. She may become frustrated with an Aquarius man, at least at first. Over time, however, they may be able to work through this and find a mutually satisfying compromise.

Also, read our guide on seducing an Aquarius Man.

Despite their differences, if an Aquarius man and a Pisces woman do get together and stay together long enough to marry, their marriage is likely to be a successful one. There are two main reasons for this.

The first is that most of the problems that these two will run into will prevent them from getting together in the first place. The second is that both of them are extremely stable when it comes to marriage.

An Aquarius man does not like change. It takes him a long time to adjust to someone in his life. Once he does, he will not want to lose that person or find someone new. A Pisces woman is completely devoted to a partner, and she will make great sacrifices to stay with him.

Even so, they will have quite a difficult time at first. It will be hard for him to accept her emotional nature and need for reassurance. Likewise, it will be hard for her to handle the way he intellectualizes many things. On the other hand, because both of them will stick with their marriage, over time they will be able to work things out.

Similar to Aquarius man and Scorpio woman, if they work through their differences, they will make good parents. They will complement each other well. A Pisces woman is a devoted and tender mother, but she can have difficulty with consistency and setting limits.

An Aquarius man will provide intellectual stimulation and is able to set limits, but sometimes he can be a bit cold. Together they will be able to strike the right balance.

An Aquarius man and a Pisces woman will have a difficult time working together. He does not really like working with others as a matter of course. He does not want to be told what to do, nor does he want to be bothered supervising anyone else.

A Pisces woman often loses focus, and it is hard for her to stick to one task without wandering off. While an Aquarius man could help her with this, he often will not think to.

Also, an Aquarius man may be dismissive of the ideas of a Pisces woman. Many of them come to her through intuitive flashes, and she may have difficulty explaining them to him in a manner that he will accept.

If he can learn to appreciate her, though, they could make a good team. She sees things that he cannot, and she is adaptable in a way that he is not. Even so, she will not try to change him or the way he does things. This will make her a good partner for him if he allows her to be.

The main difficulty between an Aquarius man and a Pisces woman is the different way each of them sees the world. An Aquarius man is logical and looks at the world analytically. He is not swayed by sentiment or emotion.

A Pisces woman is intuitive and emotional. She sees things that cannot be analyzed with logic. This will make communication between these two difficult.

The only way for these two to understand each other will be through time and patience. They will need to accept each other as they are. It will also help if both of them have friends outside of their marriage so that they can each get what they need without burdening the other for what they cannot give.

Also, read our guide on how to make an Aquarius man miss you in order to encourage him to mend any arguments you have.

An Aquarius man and a Pisces woman are an unlikely couple, and in most cases, they will not get together in the first place. If they do get together, it will take time for them to understand each other. Yet, both of them will stick with the relationship, even if there are problems.

For this reason, over time, they can learn to communicate and to get past their differences. If they do, they can be a remarkably stable couple.